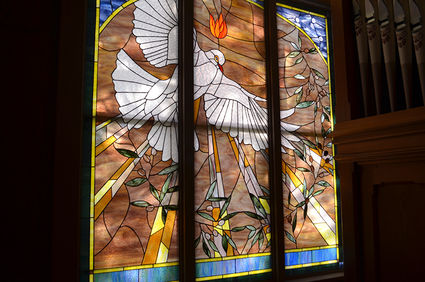 In September of this year, Our Saviour's Lutheran Church received a makeover when four windows were replaced by 12 stained glass panels designed and hand crafted by member and Skamokawa resident Theresa Videan.

Videan has been working with stained glass for eight years. She picked up a couple books after she retired, bought some old glass and tried her hand at cutting. She never had any formal training, but when her learning stalled, visits with a glass artist in Astoria and another in Vancouver helped her move forward.

"The glass community is so open and helpful," Videan said. "I'd call local glass artist Ruth Doumit when I got stuck with this project. She was very generous with her time."

As a member of the congregation at the old church on the island, Theresa's eyes were frequently drawn to the plain south facing glass windows.

"It was on my heart," she said. "I kept thinking that it needed something."

Puget Island resident Art Vik was an inspiration. One day he told her about clearing the land for the church when he was young. He mentioned that he'd always wanted to see more stained glass.

In San Jose, Theresa had been a single mother with a demanding job in dispatch and 911. She'd had little time for herself and no outlet for the stress. When she retired, she sought a hobby that would bring her some piece. Though she does not consider herself an artist, she always had an appreciation for glass art.

She found that the merciful nature of art was like a balm to the residual trauma of her former job.

"I really like it," Theresa said. "You forget what time it is. You forget to feed the dog. And unlike my job, if I make a mistake when doing glass nobody dies. It's very freeing. But it was a hobby. I never imagined doing a project this big." 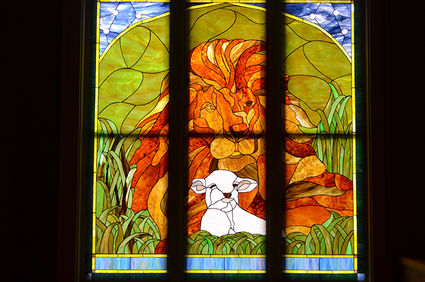 It took her eight months to complete the 12 panels that make up the four windows, which were installed by her husband, Edward, on September 17.

"Some people are confident in their faith," Videan said. "It hasn't always been easy for me. I think the journey of creating the windows holds more value to me than having them finished and installed. The work is slow and I had to consider each symbol and all those pieces of glass. I had to think about what they mean to me and my life."

Pastor Theron Hobbs spoke appreciatively of Videan's offering and of the heart that went into the work.