By Ron Wright and Carrie Backman 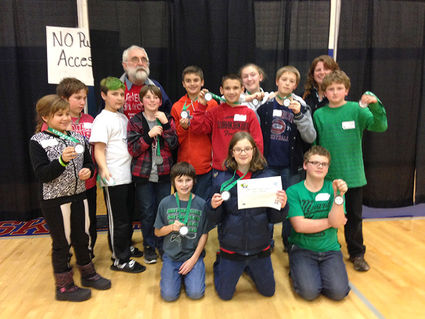 Each team competes in four events at the tournament:

Core Values (given a problem – how well does the team work together to solve the problem),

Design (how well do the team members understand their robot and programming to solve the Trash Trek course Missions),

Project (how well does your team solve a problem related to trash in their community), and

Competition – how many points can the team's robot score in solving the 12 Missions in two minutes and thirty seconds – best run of three trials.

After the competition event we were in 7th place with a best score of 297 points. During the award ceremony the announcer stated that the team did so well in the other three events that we were sixth place overall and qualified for Regional.

The Regional Tournament competition is on January 23, and runs from 8 a.m. until about 5 p.m. in Olympia. It is open to the public (no charge) from about noon until 4 p.m. with the awards starting about 4:30 p.m. The top eight teams from Regional advance to State on January 30 in Kent.

Our team will be presenting to the Wahkiakum School Board at its next meeting, December 17. Come see our team talk about our season and preparations for the next level.

We will also talk about the current status of our Trash Trek project – our plan to encourage everyone in the county to Recycle or Reuse trash. We were very much encouraged by our reception at the County Commissioners' meeting last week and are building on it. Come get involved!

We need some assistance with designing and sewing/knitting team hats related to our Trash Trek project mascots – Rowdy and Rowdette the Recycling Robots – as chosen after suggestions from students at our elementary school. If you have an interest in helping us out, please come by our clubhouse.

In February we will be forming teams to compete at the HS and MS levels in the Camas EV3 Sumo-Bots tournament in May, and the M.A.T.E. underwater remote control robotics tournament in Auburn, also in May. Come to the school board meeting for more info if you have an interest in learning more about these.

The team meets at our clubhouse, the WHS shop and computer room, on Mondays after school and in the evenings, and on Wednesday evenings. Come visit us to catch robot fever.

"It's been an awesome experience to see how far they've come in so short of a time," said head coach Carrie Backman. 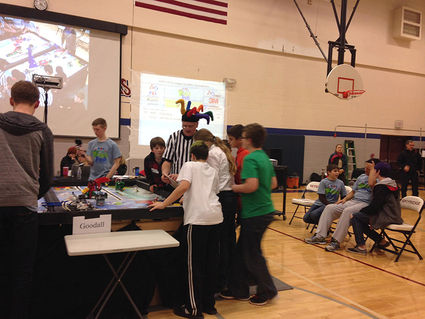 The team listens to our referee explain our score.

"How exciting! Congrats and thank you to all for helping make this such a positive experience for our students," said Bob Garret, WSD Superintendent. Parents and volunteers helping were Patrick McKay-Beach, Beth Struntz, Tom Shofner, McKay Menard, Chris Wuestefeld, Steve Prescott, Mary Bush and Michael Backman.

FLL is a competition for students from upper elementary school through middle school, supported by Washington State and several nationally recognized companies. You can read all about FIRST Lego League at this link: