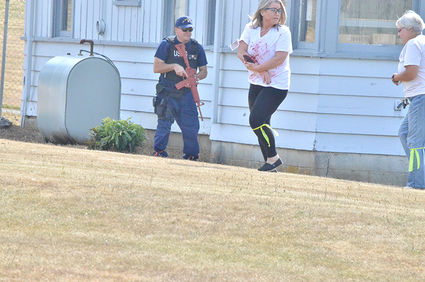 Cassie Burdick and other volunteers portrayed injured "victim" with wounds created by a moulage artist.

Last Friday, local law enforcement and emergency personnel had an opportunity to practice their training along with other agencies in a full scale mass casualty incident at Wahkiakum High School.

Several volunteers arrived early in order to be given life-like wounds by moulage artists. Overall, more than 160 people participated in the event.

Only these so called victims, the volunteer criminals, high school staff and first responders knew exactly what was happening inside the school walls. The initial crime, an active shooter, and several bombs placed around the school, set the scene. Everything that followed was a variable and out of the control of the incident designers.

There was no live ammo on the scene. Law enforcement was checked in triplicate to be sure. Volunteers were checked three times as well. Paint guns were used.

A loud speaker announced that the event was starting and in the VIP/Press area behind the school, a radio was initially the only sign that something was happening. Voices on the radio came and went.

One officer was down and he needed back up. Later, despite several calls, another officer stopped responding altogether.

Deputy Catherine Hager, thankfully wearing protective gear, had gotten a paint ball between the eyes. It may have been paint, but she respected the nature of the shot and responded appropriately.

It was eerie and it certainly wasn't peaceful at the sheriff's office. Dispatcher Dave Davis had just gotten off his shift when the call came in. Soon he was one of six in the office and they were all busy.

The incident wasn't real, but the magnitude of the situation wasn't lost on Davis.

"I tried to treat like it was real so I could experience it," Davis admitted. "You've got to be prepared for everything."

Raedyn Grasseth who is an administrative assistant in the sheriff's office supervised the 911 calls for the event.

"I think overall it worked pretty well," she said. "It sounds like people got a pretty good idea of what works and what doesn't." 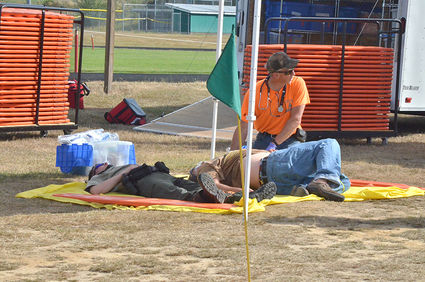 Duncan Cruickshank, a member of the Skamokawa Fire Department, treats "victims" in the mass casualty incident. Orange stretchers were stacked behind him, ready to be used if needed.

Inside the school, outside of law enforcement there were other first responders, the teachers and staff.

"It was incredible," WHS Principal Stephanie Leitz said. "It gave us an opportunity to test all the equipment we purchased with the security and technology levy, to see how they all worked together."

"Everyone was very professional," English teacher Audrey Petterson said. "I'm really grateful for all the volunteers who were here.

"I'm grateful for the experience," Leitz said. "It was a reminder that we have good procedures in place and great, caring community members."

Sheriff Mark Howie praised the first responders for their teamwork and professionalism during the stressful incident. He and his team will spend some time discussing their response to the event in the coming weeks to see what they did right and where they can improve.