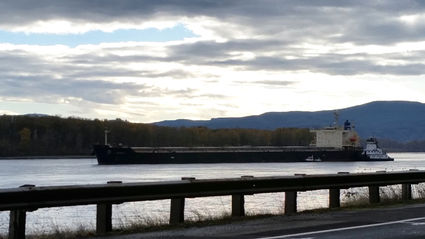 The bulk carrier Nenita lay at anchor Saturday afternoon for inspection after running aground earlier that day near Skamokawa.

The Nenita, a 738-ft. long bulk carrier loaded with grain, ran aground early Saturday morning in the Columbia River near Skamokawa and began taking on water.

According to the US Coast Guard, the outbound vessel lost propulsion and ran hard aground around 3:18 a.m. The crew found water leaking into the peak of the hull and isolated the area.

The vessel was refloated and towed to the Port Westward area later Saturday for further inspection.

The Marshall Islands-flagged freighter was loaded with grain.

The vessel was also carrying a load of fuel oil. The Coast Guard said the crew initiated their response plan and notified the National Response Corporation as the designated oil spill response organization. A Coast Guard helicopter crew surveyed the area around the ship but saw no signs of pollution.

The vessel is now moored at Kalama for inspection and repair.