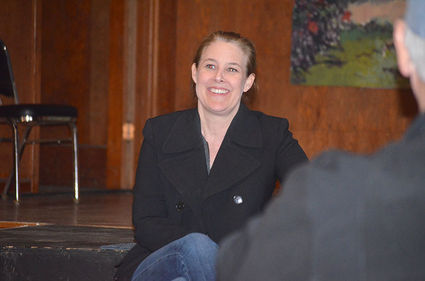 Last month, Carolyn Long, a professor of political science at Washington State University Vancouver and candidate for U.S. Representative for Washington's Third Congressional District, spoke in front of about 20 concerned citizens at the Skamokawa Grange.

Here are some of her thoughts:

"I got into this race because the work I was doing on political polarization really impacted the way I saw our democracy," Long said. "We have people that aren't really working together. I think a lot of our policy issues require bipartisan solutions and I think that I could bring that approach to congress. I think that I could help fix the institution which I think is irrevocably broken because of its polarization. There is lot of obstructionism, there is a lot of demonization of the other side. The framers really envisioned an institution where people could work together to find common ground for the common good and I think we need to elect people to do that."

• Bringing good family wage jobs back to the area.

• "Town halls are important," Long said. "It's one of the only chances you get to see your constituency and hear what they have to say and what their concerns are. It's an important part of getting to know your district. If elected, I hope to come to town hall meetings, look you in the eye, especially if we disagree, and give me the opportunity to tell you why I disagree and you an opportunity to tell me why I'm wrong."

"Our motto is 'people over politics' because I'm concerned about polarization. I think we've become to wedded to our party ID."

On eliminating the electoral college:

"I'm not in favor of abolishing it," Long said, "because if it was replaced with a system of just a direct vote for the president, I think it would change the way our presidential elections are held. Successful candidates would just focus on the coast where most of the people are. Most of rural areas would be ignored by most candidates. I'm in favor of some sort of bifurcated system where you have the electoral college offset by rules about how those electoral college votes are allocated. In all states but two you have a winner takes all system and in those two states, those votes are divided proportionally. If that could be done in a way that doesn't just rubber stamp the direct vote I think that might be an interesting solution, but it would have to happen on a state by state basis and it's a little complicated."

"It is a terrible decision and I've stated publicly that it should be reversed," she said. "I think in order to address the corrosive role of money in politics we should look at pieces of legislation and increase transparency and look at the caps we have on different kinds of funding."

How is she financing her campaign?

"The hard part about this is you have to be raising money all the time to get your message out," Long said. "I'm financing my campaign by fundraising. I have an emphasis on small donors, and as many donors as possible. I took a vow at the beginning not to take corporate money. I will take PAC money because I'm a proud union member. Their values and voice align with my own. I'm trying to get out as much as possible because it's lots of fun. I think the voter contact makes me a better candidate."

"Automation has led to the decrease of jobs in particular industries," she said. "I speak on recognizing the inevitable which is that it is happening, but also emphasizing which types of jobs can't be automated and trying to prepare people to work towards those types of jobs. I don't believe that a university education is for everyone. I speak a lot about what happens in trade, we can have apprenticeship programs where they earn while they learn, and come out of it with a skill that hopefully won't be duplicated by automation anytime soon that provides a family wage job. I'd like to increase those type of job opportunities available. Schools are for preparing for careers and not just preparing for college."

On working across the aisle:

"I think we are going to see more pragmatists elected to office," she said. "Some of our best pieces of legislation have always been bipartisan. One of the problems with the Affordable Care Act was that it was a straight party line vote. I will reach across the aisle. If someone doesn't want to take my overtures and work with me, then I'm going to work with what I've got, but I'm never going to stop the conversation from happening, I'm always going to listen to the other side because I think it's important."

"This is where you will see my pragmatic approach," Long said, "with a republican president, a republican senate and maybe a democratic house. I look at what we can do right now to stop the bleeding. I think we need to address what the Trump administration has done to decrease the window of time for people to enroll, to decrease the amount of dollars for advertising ACA. The individual mandate is done, so if we could get that passed it would be great but it's probably not going to happen. Back things like the Alexander-Murray bill which will provide those cost savings to people in areas who need it, so it decreases the premium. I think that's what we do in the short term."

"Then we have a look at other ways to provide comprehensive care," she continued. "Look at more of a public option so that the government can provide an option either through an existing system where people can purchase insurance from government which would then allow a counterbalance to private insurance and an alternative to people who don't currently have care."

"Then I think people would get comfortable with a government run insurance," Long said. "I think one of the great barriers is that people don't understand it because of its complexity. But they are also fearful of a government plan, which is what happened with the ACA, because they thought government was going to control who they could see. A public option would get us a little bit closer to expanded care. Then at some point we have to start talking about single payer. But it is not going to happen automatically, because there are costs involved and there is a tremendous transition that has to happen."

"I'm not going to wait for the perfect," Long said. "What did President Obama say? 'Perfect can't be the enemy of the good.' So let's do what we can and show people that our institutions can be effective and politicians can deliver. I'm not going to come to public settings and say the ten things I'm going to do if elected. I think that's dishonest and it decreases people's faith in the entire system."

Typical flashy stump talking points, political polarization ,bipartisan solutions,obstructionism,and my favorite pragmatic approach! These things have been said by countless pro establishment Democrats for years. Yes it sounds familiar! I will offer some advice to the candidates. This is the 21st century and yes politics are challenging. That being said just run on a populist platform that state the issues you will support. The people are tired of the political two step shuffling.

Washington has enacted the National Popular Vote bill. It is 61% of the way to guaranteeing the majority of Electoral College votes and the presidency to the candidate who receives the most popular votes in the country. All voters would be valued equally in presidential elections, no matter where they live. Candidates, as in other elections, would allocate their time, money, polling, organizing, and ad buys roughly in proportion to the population

A successful nationwide presidential campaign of polling, organizing, ad spending, and visits, with every voter equal, would be run the way candidates campaign to win the closely divided battleground states, such as OH and FL, under the state-by-state winner-take-all methods. Rural areas, suburbs, exurbs, and cities all receive attention—roughly in proportion to their population.

Support for a national popular vote has been strong in rural states None of the 10 most rural states is a battleground state. The current state-by-state winner-take-all method of awarding electoral votes does not enhance the influence of rural states. Their voters are ignored, and so are the issues they care about most.