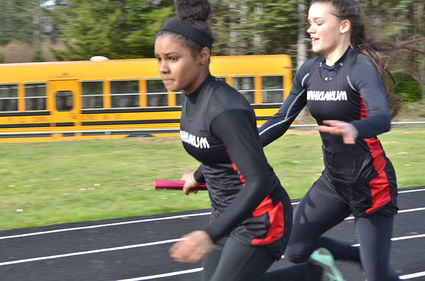 The Lady Mules took second place in the 4x100 meter relay at their only home meet of the season. Here, in the final leg of the race, Laila Abdul-Kariem received the baton from McKensi Fluckiger.

The Wahkiakum Mules hosted Pe Ell, Toledo, and Toutle Lake at their only Central 2B home meet last Thursday. The Mule boys took fourth place with 11.5 points and the girls took second with 64 points.

Freshman Braxton Johns took third place in the 800 meters with a time 2:32.53, a personal best.

Senior exchange student Simon Stepanek placed sixth in the 400 meters with a time of 1:05.41.

Freshman Jansi Merz won the discus with a throw of 77-08. Freshman Shelby McEneny took second with 73-01 and Nalani Schultz finished in third place with 69-07.

Freshman Laila Abdul-Kariem placed second in the 100 meters with a time of 14.13. She also placed fourth in the long jump with a distance of 13-03.

Merz took sixth in the triple jump with a distance of 24-01.

Schultz took fifth in the shot put with a distance of 23-01.

After spring break, the Mule track and field team will travel to Mossyrock next Thursday for their next meet.