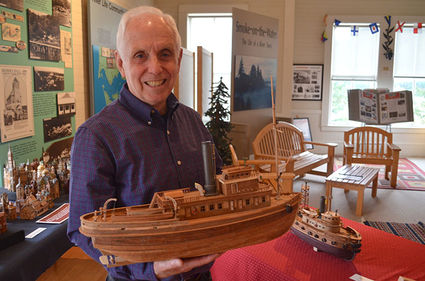 Mike Cullom, a Puget Island resident, recycles wood for his creations. He was one of five local woodworkers to participate in the Creative Wood Design Show at Redmen Hall.

In Skamokawa, at the Creative Wood Design Opening on Saturday at Redmen Hall, five Southwest Washington men shared their work with visitors.

Redmen Hall President Pam Emery introduced the group and remarked on their shared passion for wood, as well as their different techniques with the medium.

Puget Island resident Gary Bergseng estimates that he has been working with wood for 20-25 years. He didn't take shop in school, but he had a couple of uncles who were carpenters.

On display were flag cases, a cedar stand to hold an ice chest, cribbage boards that were shaped like fish, and a table that he made for his wife.

It's her fault," Bergseng said of his wife, Vicki. "She said that's what I want. Do it."

So he did. He doesn't really like to sell his work, preferring to donate the items to causes like Dollars for Scholars, or give them to friends.

Steve Ullakko of Naselle makes trivets and kitchen utensils, and is always open to suggestions.

Recently, some lefse makers had some definite opinions about the sticks he made specifically for the specialty.

At one bazaar, a woman said the stick should be thinner. At the next bazaar, it was too long.

It was starting to sound like the story of the Three Bears.

But Ullakko is okay with it and makes adjustments. A friend from Seattle has requested salad tongs, and Ullakko gladly gets an opportunity to be creative again.

Eugene Freed and his wife, Janet, have lived on Puget Island for 14 years.

"I got a wood turning lathe when I was about 15," Freed said. "I set up a shop here about seven or eight years ago and really got into turning and then I got into these segmented bowls."

Freed is one of those people who sees things and then just turns around and does them. The jargon doesn't mean much to him, but the process comes easy.

"My dad and I worked on cars, fixed the house, fixed the roof, made little cars and boats out of wood," Freed said. "My dad was a wood carver. I never got into the carving part, but I liked working with the tools."

Three years ago, Tom Newman retired and moved to Ilwaco. A month later he carved a fish out of wood.

He's been hooked ever since.

"My first one was really primitive," Newman said.

He carves the form, inserts the fins, burns the wood to define every scale, and then begins to airbrush.

Newman is planning to make a lot more of them. It's been a fun and creative outlet and he's enjoying the process. He just has to look at a picture of the first fish and see how he has improved. And he can look at other artists' work, and envision the improvements that will come as he masters the art.

Puget Island resident Mike Cullom is not only a woodworker, but a photographer and a philosopher.

"I decided to make some blocks for a granddaughter," he said. "They really weren't much more than that. I wondered if I could add a little more detail.

It turns out he enjoyed it, too.

For nine years, he has been creating tall ships out of kindling and miniature architectural structures from wood blocks.

"One of the things that appealed to me is that there are no mistakes," Cullom said. "If I slip it becomes part of the plan."

Most of his work has a European look to it, though a few pieces are clearly an American design. Only one time has he had a particular place in mind, but the rest come from his imagination, perhaps an amalgamation of something he's seen. 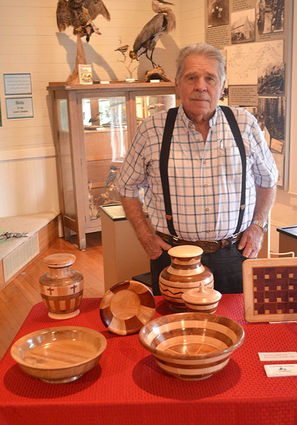 Some are stained, but he's discovered he likes the color of wood, so others are not. He uses several tools for the delicate work, including old dental drills.

"I think my interest in miniatures began with work on a model train," Cullom said.

We are so consumerism oriented in this society. Everything is manufactured and mass produced. Part of the satisfaction of this for me is make it your own darn self out of stuff you can find that people have thrown away."

Cullom encourages his family to nurture creativity rather than consumption.

"We aren't into anything that requires sustained effort," he said.

Maybe it's time to take up woodworking.

The exhibit runs through April 29.