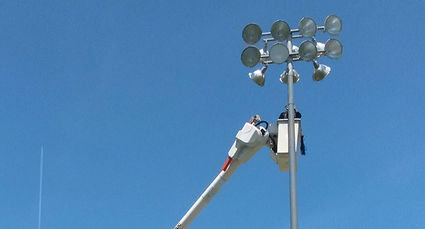 PUD crew placing the pulleys and ropes so emergency antennas can be hung at a moment's notice.

Story and photo by Ron Wright

Monday afternoon the County Sheriff's Department of Emergency Services teamed up with the Wahkiakum School District, Wahkiakum County PUD and the Wahkiakum Amateur Radio Club to get us one step closer to being able to deal effectively with "the big one." Today's step was to hang pulleys and ropes at the baseball field so that emergency antennas can very quickly be hoisted and used to facilitate communications from our county out to anywhere else in the world.

The next step will be to test the system from 11:00 a.m., Saturday June 23 to 11:00 a.m., Sunday June 24 during Amateur Radio Field Day. Many communications modes will be tested using five antennas and stations, including Morse Code, FM simplex voice, single sideband, PSK31, FT8, MFSK16. The public is invited to check out the radios and antennas and different operating modes. You can even try using the radios under the direction of an operations coach!