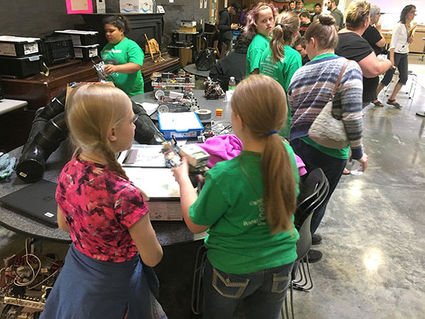 Ruthie Blalock showing another competitor how her robot works, Audrey Morton and Montana Stephens in the background. Photo by Joe Blalock.

Next year will see the beginning of a new robotics league: the Southwest Washington Independent Robotics League (SWIRL). The main reasons for forming this league are to significantly reduce the cost of robotics competitions and to encourage competitions across brands. Toledo School District will host a tournament in November, Wahkiakum again in March, and Camas again in May. There is room for one more district to host a tournament in late January. The same six events will be held at each tournament, plus each host may run other events at its discretion. The three "EV3 restricted" events will be open to middle school and younger students, while the three "unrestricted" events are open to students K-12. Students can begin preparing now; the event rules are online at https://sites.google.com/camas.wednet.edu/hayezdayez . Our own tournament, called "Wahkiakum Wohbot Wohundup," is co-sponsored by Wahkiakum 4-H, Wahkiakum Marine Resource Council and Wahkiakum School District. We have room for more sponsors of our tournament if your company is interested in getting involved. Contact Ron Wright at 4-H for more info.