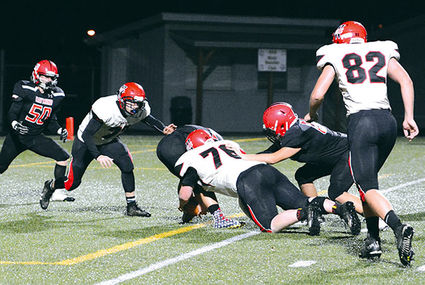 Mule Damion Curl sacks the Raymond quarterback in the endzone for a two-point safety.

The Wahkiakum Mule football team is back in the state playoffs for the first time in five years.

The young, 5-5 Mules controlled the ball to upset the 6-4 Raymond Seagulls 22-10 last Friday in Aberdeen.

The Mules ran the ball 49 times for 253 yards and added 97 yards on six completed passes while holding the Gulls to 80 yards on 18 runs and 19 yards on one completed pass.

"Our offense just controlled the ball," commented Mule Coach Eric Hansen. "Fifty-four of their 80 rushing yards came on one play, a touchdown. We stuffed them the rest of the time."

The win earned the Mules a berth in the state Class 2B football tournament. They'll take on the second ranked, 10-0 Jaguars of Tri-Cities Prep at Chiwana High School, Pasco, on Saturday, 1 p.m.

Raymond got on the scoreboard first with a 25-yard field goal at 5:21 of the first quarter.

The Mules replied, with quarterback Lucas Brown scoring on a seven-yard run with 45 seconds left in the opening frame.

From that point on, the game belonged to the Mules. They ran 48 offensive plays and held the Gulls to 18. 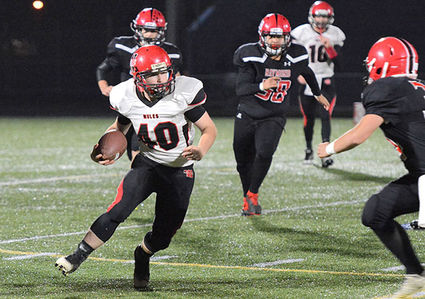 Chance Cothren picked up yardage in the Mules' win over Raymond.

They took the lead when Brown scored on a 13-yard run midway through the second quarter; Brown passed to Braxton Johns for a two-point conversion and 14-10 lead. Brown closed the first half with a six-yard touchdown run, giving the Mules a 20-10 lead.

The Mules' final score came with 1:04 left in the game when Damion Curl sacked the Gull quarterback for a two-point safety.

Brown completed six of 12 passes for 97 yards without an interception. Nelson caught four passes for 43 yards; Cothren caught two for 41 yards; Johns had two completions for nine yards, and KC Beery had one catch for four yards.