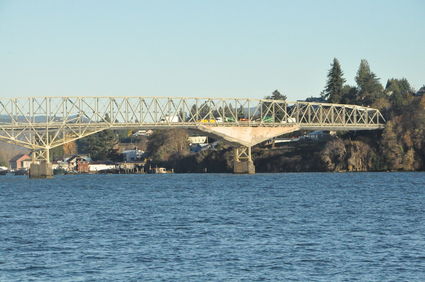 Painters working on the Puget Island bridge have finished the upper portion and have moved to the supports under the road deck. Photo by Rick Nelson.

Contractors for the Washington State Department of Transportation's Puget Island Bridge project are making progress, and the night time full bridge closures needed to replace deck panels could end as early as December 21.

The work is weather dependent, according to Tamara Greenwell, SW WSDOT communications officer, so the possibility remains that total bridge closures could continue into the next year. 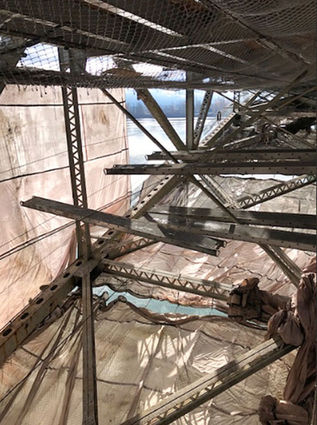 Under the bridge deck, painters work on a floor of chain link fencing enclosed in tarps. Photo courtesy of the Washington State Department of Transportation.

Painters have completed work on the upper structure and are now working below on pier supports.

"It is too soon to tell if there will be a winter shutdown," Greenwell said. "We had several stretches of good weather this fall, and the contractor continued painting work. We should know more about the winter work plans in the coming weeks."

The deck panels will be covered with plywood until April, when the paving window opens. The timing of that work is also dependent on weather and once again, full bridge closures will be needed to pave the bridge.