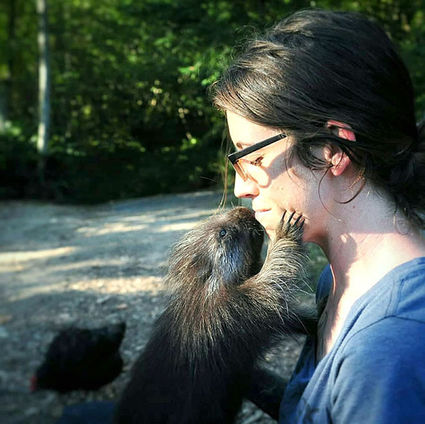 Edgar Alan Poke, local porcupine, has adopted a family near Cathlamet. One day Edgar crawled into Megan Blackburn's lap, grabbed her cheeks and sniffed her lips. He's been affectionate and playful ever since.

"Oh life is bigger, bigger than you," REM's Michael Stipe first sang in 1991.

That lyric seems to echo in my ears when I don't have an easy explanation for things I don't understand.

Like when a wild creature, orphaned, creates family where he finds it.

This is about a porcupine named Edgar. On formal occasions he goes by Edgar Alan Poke, the name given to him by the humans he adopted.

That's right. He adopted them.

A pal first noticed the lonely little porcupine on the property of Megan Blackburn and Erik Friend in June of this year, sitting on a rock in the sun near their driveway. They began checking on him, always from a distance. One morning after a rain, they found him sitting in a new spot at the top of their driveway.

Slowly, day by day, he moved closer to their house.

"We never saw any sign of an adult porcupine, a mama," Blackburn said, noting that they had seen a few that had been struck by vehicles on SR 4 near their home that summer.

"It's so sad," Blackburn said. "They are giant, slow animals."

They built a small enclosed area for their new friend who didn't seem to be going anywhere. It had an opening that allowed him to come and go. They also provided a box with hay, water, and fed him parsnips, carrots and sweet potatoes.

"Then he ate half of my garden," Blackburn exclaimed. "Peppers, tomatoes, squash. All of my kale!"

Friend thought maybe it was time for Edgar to move.

Porcupine he may be, but Beloved he had become. That was the beginning and end of that.

Surprising everyone, Edgar seemed to reciprocate those feelings. One day, Blackburn was sitting on a stump near their home when he crawled into her lap and started nuzzling her armpits and chin.

"I had waited for him to make the first move," Blackburn said. "He reached up and grabbed my cheeks and sniffed my lips and nose. I was squealing with excitement. All my porcupine snuggle dreams came true." 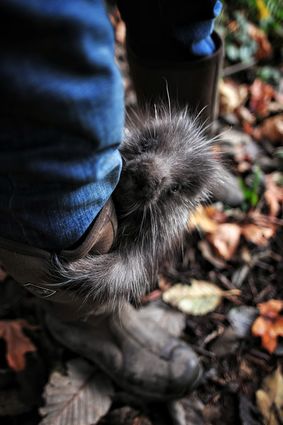 "The leg holding happens a lot," Blackburn said. "He hangs on and I drag him along."

Much to everyone's surprise, maybe even Edgar's, he loves to play and is always game for a belly rub.

Blackburn, Friend, and their two young children Birdie and Everwild, are learning to deal with Edgar's quills as he gets older and bigger. There is a safe way to pet him, but Blackburn says the pain of getting stuck is minimal, much like getting snagged on a thorn.

They go for walks every day. Edgar still wants to cuddle, but he's becoming more independent, disappearing for longer periods of time.

"I want him to be free and wild," Blackburn said, "but I worry the whole time until I see him again."

To see more pictures of Edgar, check out Blackburn's Instagram, http://www.instagram.com/meggbburn. While there, click on the link for videos of Edgar.