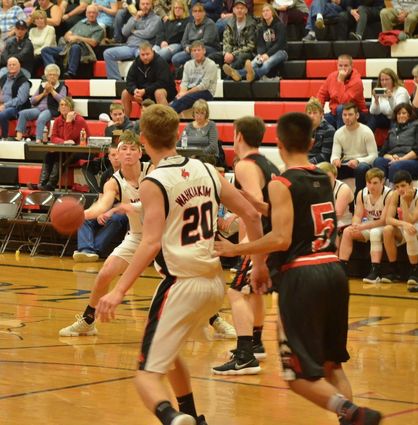 Luke Brown passed inside to Evan Quigley in the Mules' 81-45 loss to Toledo on Tuesday.

They traveled to Napavine on Saturday and lost 62-57.

"We came out flat on offense and we were slow on defense," Coach Todd Souvenir said. "If we are going to have success, we need to play defense and rebound every night. Our defense can kick start our offense on nights we are struggling. We dug a hole in the first half giving up too many easy buckets and second chance points. I was pleased with the effort on both ends of the floor in the fourth and Quentin and Luke had a great quarter."

The Mules hosted a tough Toledo team at home on Tuesday and lost 81-45.

"I thought the guys made some improvements on defense and they showed me that they can play man ,which down the road will be helpful," Coach Souvenir said. "Toledo is a very good team that plays great defense."