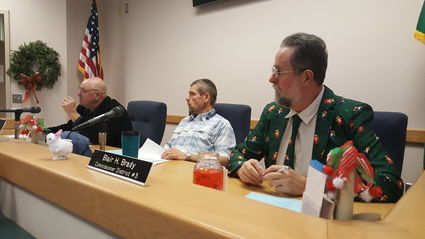 Wahkiakum County commissioners held their final meeting of 2018 last Wednesday. It was the final meeting for Blair Brady, right, who lost the election to Gene Strong. Next to him are Dan Cothren, left, and Mike Backman, center.

Richard Erickson, who was in attendance to hear an update on sand replenishment for Cape Horn, had similar concerns.

Key agency players were out due to Christmas break, Commissioner Dan Cothren said. He suggested tying on logs to help buffer the wake.

Try to take care of your own right now," Cothren said.

"We haven't had to approve a part time deputy in five years," Howie said, "but while we've got a cadre of folks in the academy, that leaves us short quite a bit."

The pay for the position will be eligible for salary reimbursement, Howie said.

Howie said that he and the undersheriff were filling in for their colleagues who were training and were on call out at all times.

Brady thanked them for their service.

Cothren was appointed chair and Commissioner Mike Backman was named vice-chair for 2019.

Finally, Brady, dressed in a festive two piece suit trimmed with lights, received praise from his colleagues before quietly and kindly helping Backman get through some of the intricacies of public meetings. As they made their way through flood zone districts budget supplements, Brady murmured prompts, helping Backman to recess, ask for comments, close the hearing, and go back into regular meeting before doing it all over again two more times.

"We didn't always agree on everything but we went through the issue for the issue. I appreciate that. I wanted to say thank you, and I enjoyed working with you," Backman said to Brady.

"I'm definitely going to miss Blair," Cothren said. "With the legislature, I go quite often and testify. Blair has already been there and talked to them. That means a lot. They don't have to just read the paperwork, they've got it by mouth."

"When I went to Washington State Association of Counties meetings," Backman added, "there are 39 counties, but everybody knew him, and everybody knew the county because of him."

"I appreciate you giving your service to the community. I think you've really done a hell of job, myself," Al George, a Wahkiakum County resident said.