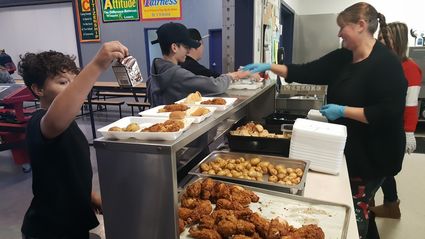 Michelle Wisner (right) works full time in the grade school kitchen, and she's always thinking about the next meal. That's how it goes when you have to prepare one breakfast and three lunches five days a week. Superintendent Brent Freeman believes it's because of the work they do, that staff like Wisner are the first to learn the names of each student. It was chicken drumsticks and small potatoes for lunch on this Friday in December.

Wahkiakum School District is preparing meals for about 300 students every day. Sometimes twice a day. For some students, the breakfast and lunch they receive at school are the best chance they get to have for a nutritional, filling meal.

This is all done by two full time members of the kitchen crew, and one part time person who also performs custodial duties throughout the day. According to Superintendent Brent Freeman, that's the good news.

"It's a complex process," Freeman said. "Everyone wants to beat up school lunches, but there is a tremendous amount of thought, planning, and effort put into providing what we can."

Freeman is very proud of the creative staff, led by Food Services Director Krista Fritzie. They are working hard to feed students tasty, healthy, hot meals, despite the challenges that come with working in a small, inefficient kitchen, in an aging building that wasn't designed for the needs of 21st century students.

There has been a lot of talk about equity in education across the state of Washington and this begs the question: Are inadequate kitchen facilities and an absence of any dedicated cafeterias just another way that Wahkiakum students are getting shortchanged?

At the high school, what was once a teacher's break room has also become a kind of makeshift kitchen. There is no counter space to work, although there are refrigerators and freezers, only one commercial grade. There is a commercial oven, purchased specifically to cook a meal right before it is served, but all other preparation must be done at the grade school and transferred to the high school in a vehicle by part time kitchen crew member Mary Heagy.

The only real kitchen on campus is at the grade school. It has a pretty small footprint, nowhere near the size of a classroom. There is little more than a counter for serving, a large and ancient walk in cooler, a small dishwasher, a commercial oven, a low end residential stove with four burners, a couple sinks, and a six foot long table for food prep.

A remodel in 2000 focused on classrooms, but little was done to the kitchen except the addition of some toasters, a warming table, and a couple electrical upgrades, according to Fritzie. A relatively new addition is the large walk in freezer, which sits outside.

Staff estimates that the freezer might hold 10 days worth of food.

Which brings up storage. There isn't much, and storage issues cre-

ate their own set of problems.

A rolling bread rack sits just inside the door to the storage room, which is just off the kitchen. Inside, shelves filled with supplies line the walls of the small room. Some of those supplies include commodities, which come once a month.

Commodities are provided through a government funded program that helps reduce the cost for nutritional food. They included the chicken drumsticks and potatoes that students had for lunch one day, and comprise most of their meals at breakfast.

Freeman, who compared the district's food service to any medium sized business, pointed out that a similar facility would have a freezer twice the size of the one they have.

"Is this an industrial kitchen? Is this adequate?" Freeman said. "I would say we are right on the threshold of being adequate in many areas, but some areas need improvement."

Fritzie agreed, noting that they need refrigeration and freezer updates, more storage, and more adequate, up to date facilities.

"The footprint is the same as when the school was built, and we are feeding more and more children every year," she said.

What does a lack of storage space mean? More frequent deliveries at greater cost to the district.

"We get three to four deliveries a week," Michelle Wisner said. Wisner works full time in the kitchen. "We could cut our cost down with proper storage."

Freeman noted that with a reduced budget at the district this year, they've had to make some cutbacks, but they didn't touch food services.

"We didn't want to put less of a product on the table," he said. "There is just not extra in what they do."

Following deliveries, staff must turn their focus to putting the food away. It takes up a lot of their time, and takes away from other duties.

"Menus are planned accordingly," Wisner said. "A couple months ago I had Krista adjust our menu because we had breakfast for lunch on the day commodities were delivered. It takes Courtney (Helms) and I both to serve, because so much goes on the plate. We had to serve hot ham and cheese so Courtney could serve by herself and I could put frozen food away before it thawed.”

Anecdotes like that one have Freeman comparing their work to a military operation.

But it’s also watching the transitions at the grade school.

There are purpose built cafeterias in other schools, according to Freeman. Not here.

A member of the custodial crew and para-educators come in every day to set up tables in the multi-purpose room for breakfast, and take them back down when the meal is over in order to turn the room back into a classroom. They do it all over again for lunch.

“Their logistical excellence makes this work,” Freeman said of everyone involved in getting meals ready for students. 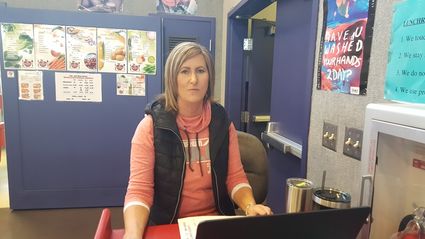 Above, left: One could easily say that Food Service Director Krista Fritzie has a lot on her plate. She has to know and comply with regulations and daily and weekly nutritional expectations for K-5 students, 6-8 students, and 9-12 students. Fritzie is a Wahkiakum alum who was responsible for bringing the hot lunch program back to the school.

A fresh burrito bar has more students staying in for lunch at the high school. The 1,400 square foot lunch room, an addition in the 1980s, seats a little less than a third of the high school population. On cold and rainy days, students eat in the hallways, in classrooms, in the library, and the gym.

“There is a lot of wear and tear on building and the custodial staff who have to keep it clean,” Freeman said.

For now, they take really good care of the equipment and facilities they have. They don’t know how long any of it will have to last.

“We’ve got older facilities that really do need some attention,” Superintendent Brent Freeman said. “Our infrastructure does not support the equipment required due to regulations in a modern kitchen. When you’ve got 60 year old facilities, you’ve got to make hard, conscious decisions about whether to maintain, update, or build new.”

“This building was built before there was a man on the moon, before there was a concept of a computer, a laptop, wi-fi,” Freeman said. “The facilities are an equity issue. I don’t think going into the future, this is what we should expect for our kids. They should get the same advantages as every kid in the state.”