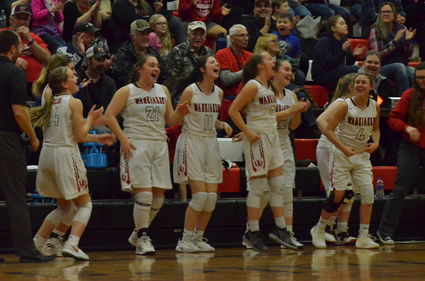 The bench was in a jubilant mood as they celebrated their seniors for Senior Night and another win for the Lady Mules. District play begins on Saturday.

The Wahkiakum Mules girls basketball team ended their regular season with a joyful noise and an 84-31 win last Wednesday.

The Mules were undefeated in Central League games and claimed the league championship. 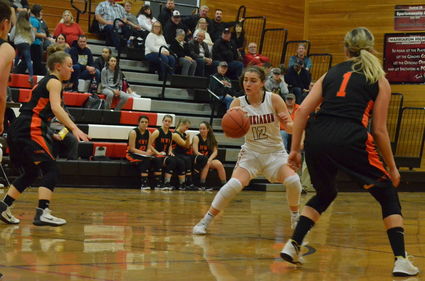 Senior Macie Elliott had a triple double in the Lady Mules' 84-31 win against MWP last Wednesday. She scored 27 points, pulled down 13 rebounds, had 10 assists, and six steals.

"Being senior night, we wanted to send those girls out the right way," Coach Rob Garrett said. "I was not only so proud of them, I was proud of my bench and other players who normally get to play a lot. There wasn't one time I saw a pouty face, they were just excited for their seniors to get to play that much and go out like that. That was pretty cool to see that much unselfishness and see everyone come together for the big picture and the right reason. That is kind of what we preach here, being a family and not being all about yourself. The whole team could not have modeled that more tonight. It was an awesome way to send the girls out on their home court."

The Lady Mules begin district play on Saturday, but time, place and challenger had not been determined by press time.

Mossyrock beat Toutle on Tuesday. Mossyrock played South Bend yesterday (Wednesday), and the Mules will play the winner of that game on Saturday.