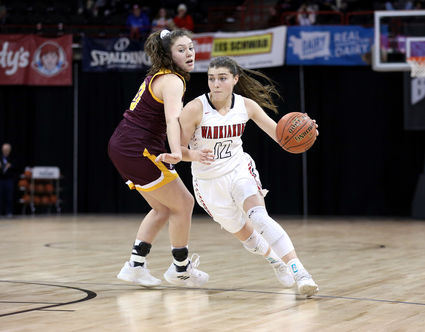 Photos for The Eagle by Chris Johnson

The Wahkiakum Mules girls basketball team took third place at the State 2B tournament in Spokane on Saturday.

Nerves were the likely culprit in the Lady Mules' quarterfinal win against South Bend, 44-21, when Wahkiakum was held to only 16 points in the first half.

On Friday, the Lady Mules lost to Liberty (Spangle) 60-54 in the semifinals. Libery got hot in the second quarter, hitting six of their nine threes for the game. Meanwhile, the Lady Mules could not get hot, averaging about 37 percent shooting, whether from outside the circle, in two point range, or from the free throw line.

"We had so much fun this year," Coach Rob Garrett said. "The girls were an awesome group to watch. I'm super proud of them."

"We're proud of making it to Spokane, of getting third and bringing home a trophy," Garrett said. "For the seniors to say they've done that four times in a row is incredible."

"We definitely wanted that gold ball," he added. "That was a big goal for us. To say we're not disappointed would be a lie. But more so than the gold ball, we're sad it's over. At this point and time, that's a bit of a struggle for everybody. We have put in so much time and effort and this part of the journey has come to an end."

"The seniors have come to the realization that it's time to move on to a new chapter in their life," Garrett said. "This has been a goal they've been working towards for 12 years now, but they're moving on to a new chapter without one another and to not have each other there for that step, that's what's tough. But that's part of the process, part of growing up."

"The cool thing about that group, because of the things they've learned through basketball and what they've learned on the court, they are going to be great people," he said. "They know what it means to sacrifice, to be out there for other people, not be selfish. That will take them far in life, make them great people in whatever career they choose. I definitely believe that. It's what makes it hard for me as a coach to lose this group. With all that being said, it was absolutely a blast this year. The entire team, from seniors to the eighth graders, really bought in to the big picture goal and were able to enjoy the process. I was definitely proud of them for that." 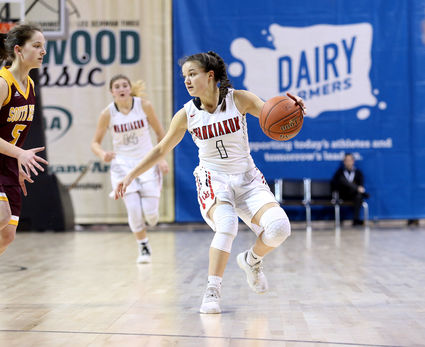 Mckensi Fluckiger moves the ball up the court in the Mules' win over South Bend. See more photos on Page 12 and www.waheagle.com.

"Everybody is going to miss what fun these girls had on the court," Garrett said. "We're going to miss that group of seniors. They have left their mark on the younger players. They set a great example. Already there are a ton of kids in the gym working on getting better for next year, making sure that when the opportunity arises again, we are able to capture it."

"I had a blast, they had a blast. It was an amazing season. It was a lot of fun and we will certainly miss it."

"Our fans have been awesome," Garrett added. "We had a great group of people over there, I don't think the girls paid for a single dinner. The community is super supportive of this group. We are extremely thankful to have the best fans over there. They love these kids and shower them with everything that they can. It was a fun year, and we will celebrate it a little bit more at the banquet."