Unmake a Bully project is back at WHS 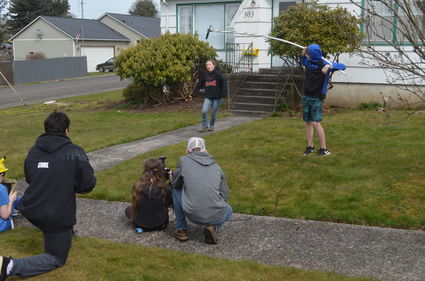 Mike Feurstein, the creator of the Don't Wait to Unmake a Bully program, was back in town to make public service announcements with local students. Last Thursday afternoon, he and Audrey Petterson's ninth and tenth grade Honor's English class filmed a scene from their short about a young woman who goes to a party and gives in to peer pressure. MJ Neves rehearses a scene where her character, who has had too much to drink, walks out of the house and stumbles to the ground. Feurstein's yearly return to Cathlamet has been sponsored by Wahkiakum Community Network.

Thanks to Wahkiakum Community Network, Mike Feurstein, the creator and founder of the Don't Wait to Unmake a Bully project was back in town last week to work with Wahkiakum High School students.

Feurstein's project is a boon for local students. It gets them talking about how to handle pressures they face as teenagers, but it also gives them an inside look at the film industry, and the moving parts in making a short film, from lighting, to directing, to acting, and more.

This year, Audrey Petterson's ninth and tenth grade English classes participated, as did some of Kayli Hurley's students.

"Mike came on Monday and talked to them about the project and asked them about ideas they had," Petterson said as kids got a scene ready behind her.

The plot for the short film had to touch on alcohol, tobacco, or other drug use, reasons people would use any of those substances, and the problems that come from their use.

Feurstein then explained all the different roles that were involved in filming and actually had the students apply for the positions they wanted, whether it was in front of the camera or behind it.

"It's so cool," Petterson said, "because of the teamwork and because some of the kids who are quiet in class have come into their own. Only Mary Jane (Neves) wanted to be an actor, and these guys behind the scenes are really loving it. Mike is so good, and I think that team aspect is really good."

"This is the third or fourth time that he's come," she said. "He really loves the kids and checks in on them. I'll see him talking to kids in the hall. Some kids who have graduated have come back to see him."

Ninth grader Cayden Mendez had applied and was selected as a director, but he was also doing a little acting.

It's fun, but it was also serious, Kalena Bowcutt, another ninth grader pointed out, as they were just about to film an important and thought provoking scene.

She had applied to be a scripty, or script supervisor, and she was busy making sure everything was in its place, that the space they were using looked like a home, as well as taking care of makeup.

To learn more about Feurstein and his project, go to https://dontwaitproject.org/dw-unmake-a-bully.