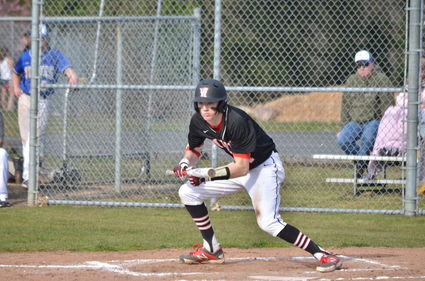 Wahkiakum senior Luke Brown gets ready to bunt in the Mules' 11-1 win against Adna on Tuesday.

Beau Carlson is back, and last Wednesday he proved that he was ready to play when he knocked the ball out of the park for a two run homer in his first at bat in the Wahkiakum Mules baseball team's season opener against Ilwaco.

What went even farther than that ball was the ripple of good feelings as a community celebrated Carlson's display of health and strength. Just six months ago, Carlson was transported to Harborview Medical Center in Seattle after suffering a traumatic brain injury in a football game. His family was unsure he would survive the night, and months of mending followed.

And in small towns like this, when our youth suffer, we suffer. And when they rise, so do we. It didn't seem to matter if you were at the game on Wednesday, the news traveled and Wahkiakum residents, past and present, near and far, smiled. Way to go, Beau!

The Mules went on to beat Ilwaco 10-0 in five innings.

"It was a good first game," Coach Marc Niemeyer said. "We have a lot of in game situations and movement to learn defensively. We had a solid approach as a team offensively and swung the sticks well."

Luke Brown added a triple and an RBI. Tristan Collupy drove in three runs and K.C. Beery drove in two. Ashden Niemeyer had an RBI, as did Chance Cothren.

On Friday the Mules traveled to Morton White Pass and beat the Timberwolves 16-0.

Niemeyer started on the mound. He faced 12 batters in three innings and struck out seven. Anderson finished the game, facing nine batters an striking out eight.

"The pitching staff did a really good job of keeping batters off balance," Coach Niemeyer said. "Offensively we started off slower than I like but we finished strong with many solid contacts."

Brown had two doubles. Niemeyer, Anderson, and Cothren all hit a double as well. Niemeyer had five RBIs.

Anderson pitched all six innings, facing 24 batters and striking out 12. He allowed one hit and one run and finished the game with an ERA of 1.