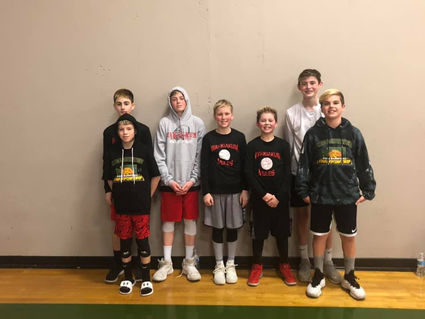 Story and photos by Laura Rose

The 7th and 8th grade boys basketball teams traveled to Spokane this past weekend to play in the State Tournament. Both teams earned a ticket to go to state by winning multiple tournaments throughout the year.

The 7th grade team played hard but started off shaky in two tough match ups and fell in their first two games. But they picked their heads up and battled in the last two games to win both in tight games both decided by less than five points. They went 2-2 for the tournament. The 7th grade team consisted of Grant Wilson, Donovan Watson, Braden Avalon, Nathan Garrett, Kyler Sause, Jacob Johnson, Nash Bjorge, and Zakk Williams. 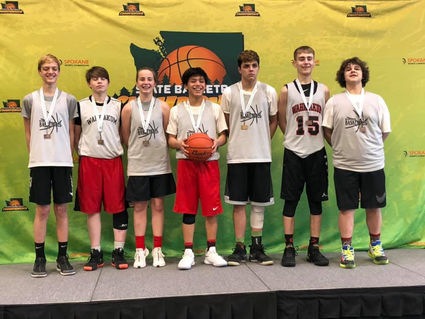 The 8th grade team came out firing from the beginning looking like they were made to be there, dominating their opponent by almost 30 points. The next three games were a tougher battle though, winning the next two games by single digits to make it into the semi finals. With only seven players on the team we were running low on gas and the next team took advantage and punched us in the mouth out of the gates putting us down 24-4 to start. But we still had fight left and crawled back to make it a two point game but never taking the lead. Losing one kid to injury and two kids throwing up in between games, a group of 7th graders had to step in and help finish the last game off. The Mules won their final game and finished with a 4-1 record and taking home the 3rd place honors out of 23 teams that consisted of mostly 3A and 2A teams. The 8th grade team consisted of Tanner Collupy, Jayden Friend, Brodie Avalon, Dom Curl, Beau Rose, Titan Niemela and Miya Kerstetter.

Way to go Mules! We are proud to have you represent our community!