James Anderson made a run for it, but still got thrown out at first base in the Mules' 3-1 win over Napavine's Tigers on Tuesday.

The Wahkiakum Mules baseball team split games this week, losing on the road and winning at home.

On Friday, they traveled to Rainier and lost 9-4.

Luke Brown had a double and drove in one run. James Anderson hit a double. Ashden Niemeyer and Quentin Nelson had one RBI apiece. 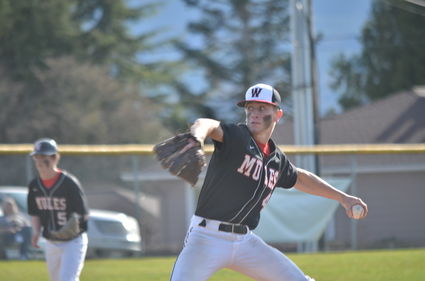 James Anderson pitched all seven innings in the Mules 3-1 win against Napavine.

"Hats off to Rainier," Coach Marc Niemeyer said. "They brought the lumber today. We didn't string any clutch innings together for run production. We had a really hard time slipping on the turf about 10 times. That didn't help us either."

On Tuesday, the Mules hosted Napavine and won 3-1.

Anderson pitched all seven innings. He faced 25 batters, struck out 14, and allowed two hits and one run.

Chance Cothren went one for three with a double. Brown went two for four and drove in one run. Brody Carlson added an RBI.

"Napavine is a good defensive ball club," Coach Niemeyer said. "They made some great plays. We couldn't muster anything together. Another real solid performance by Anderson on the bump. Tristan Collupy did a nice job behind the plate with zero passed balls."

The Mules are now 4-1 for the season.