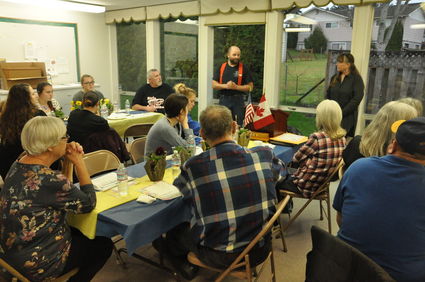 The Kiwanis Club of Cathlamet hosted the groups for an award dinner Tuesday evening.

The firefighters held a boot drive at the end of January and collected donations from motorists.

In addition the high school leadership team and Key Club--a Kiwanis sponsored club for high school students--held a series of fundraising events though March and raised over $5,000.

Key Club President Charlie Ashe said final figures won't be calculated until students return to school from spring break. She added that the students had received a $1,000 donation from an individual.

Firefighters said they enjoyed the event.

"It was fun to have people supporting the cancer program," he said.

"It wasn't just firefighters," he said. "We brought our daughters along. It's family."