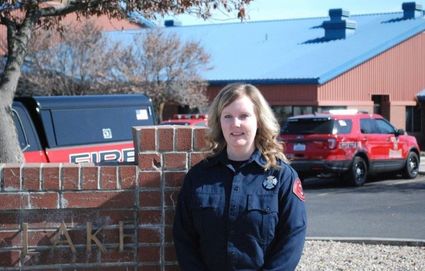 Samantha Wright, a 2007 graduate of Wahkiakum High School, is the first woman to become a full time firefighter and paramedic for the City of Moses Lake.

She became a provisional employee for the department in January and official employee on March 24. She is one of 7-10 people each shift. Each shift lasts 48 hours, and is followed by four days off.

“I’m super excited for what is next,” Wright said on Tuesday. “I hope it’s my career for the rest of my life.”

Wright started volunteering for the District 4 Fire Department while in high school and continued there until she and her husband, Mike Wright, moved to Royal City in 2015.

“I was inspired by my dad who was a volunteer,” Wright said. “If it weren’t for him I wouldn’t be here today. Dad is an inspiration to me.”

Seven months ago she became a paramedic. It took a year to train, including classes, a hospital rotation, and field ride time.

According to the press release from the City of Moses Lake, Wright holds a National Registry and Washington State Emergency Technician-Paramedic certification. She was previously employed by Lifeline Ambulance in Omak, Washington. She has served as a volunteer firefighter with Grant County Fire District 10 in Royal City since 2015 and holds certifications in wildland firefighting, hazardous materials and emergency medical services.

Wright is the daughter of Jim and Erin Wilson of Cathlamet.