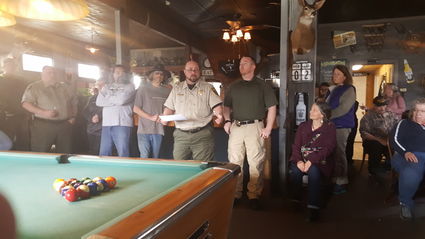 It was standing room only at the Roadkill Saloon last Wednesday as Skamokawa area residents met with Wahkiakum County Sheriff Mark Howie and members of his staff to talk about crime, prevention, and the benefits of setting up a neighborhood block watch.

Howie stressed communication with the sheriff’s office, encouraging the residents to be observant, and asking them to document suspicious activity, people and vehicles, and license plates if it was safe to do so.

After listening to questions and chatter around the room, Undersheriff Gary Howell reiterated that everybody knew something. It might seem minor, but they should notify the sheriff’s office. That bit of information might be what an investigator needed to tie something together.

“Report anything, because it helps us keep track of what is happening,” Howie said. “The way we solve the majority of burglaries is information.”

Howie went on to explain the benefits of a neighborhood block watch.

“The mission and reason for having block watches is to prevent crime and to be aware of neighborhood activities,” Howie said. “It’s also to communicate back and forth with your sheriff’s office and to network and get to know your neighbors. You are our eyes and ears.”

Statistically, where crime is happening in any county across the U.S., if a block watch is started and continued, crime goes down as much as 20 percent, Howie noted.

“We will be ordering block watch signs, which lets criminals and thieves know that the community is on the lookout and communicating,” he added. “It is a big deterrent. It let’s them know you aren’t going to tolerate all the activity that is happening.”

Howie provided some crime statistics for Wahkiakum County and then more specifically Skamokawa. He’d made copies of the information to hand out to attendees, but he had clearly underestimated the turnout. He had 15 copies and there were upwards of 60 people in the room.

“This is the biggest block watch meeting I’ve ever been to,” Howie said, which was met with laughter.

He also said there had been 58 thefts in the county, 15 of them were in Skamokawa.

“Unfortunately its a day and age where neighbors are stealing from neighbors,” Howie said. “They may have known you all their life, but if they are going down a path of stealing for drugs or whatever, they are going to steal from a neighbor. Keep your windows locked, keep your door locked.”

Before they headed home, Howie reported happily, they had block watch captains representing every area in Skamokawa.