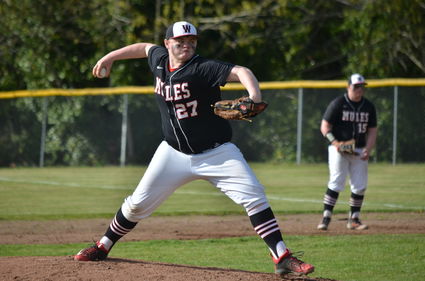 Damion Curl winds up a pitch for the Wahkiakum Mule baseball team last Friday. The Mules lost two in the doubleheader against Kalama.

The Wahkiakum Mules baseball team lost two in a doubleheader at home against Kalama on Friday.

Brody Carlson started on the mound. He faced seven batters in the first inning, walking four, and allowing one hit and three runs. Damion Curl stepped in and faced the next seven batters. He allowed one hit and two runs. James Anderson pitched to 17 batters, striking out two and allowing three hits and one run. Luke Brown came in to pitch to the final batter, allowing no hits and no runs.

"Tristan Collupy was outstanding behind the dish and Brody Carlson had a fantastic day making all kinds of acrobatic plays at second base," Coach Marc Niemeyer said. "We have to clean up mistakes defensively and the mental side as well. Offensively, I thought we swung the bats well against one of the top pitchers in the state, we just couldn't find any grass."