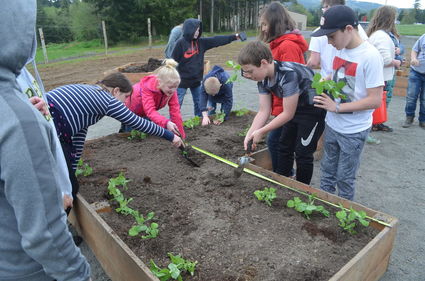 Students in Cathlamet schools went to work on a variety of outdoor projects on Earth Day. Above, Lisa Frink's fifth grade class planted seedlings in the new planters at Wahkiakum High School.

Educators moved the classroom outside at Wahkiakum School District on Monday in celebration of Earth Day. Students learned about grafting and the art of bonsai, played with farm animals, and got the opportunity to feel some ownership in the district's plans for an orchard, garden and outdoor learning center by planting apple trees and seedlings.

High school students built planters, which have been placed in a design mimicking the compass. In the center, a gazebo is planned, as well as seating, allowing for an outdoor classroom where students can study anything from science, to math, to literature.

The school garden will be expanded, and an orchard is being planted.

Across the highway lies the Farm Forest, and according to WHS science teacher Jeff Rooklidge, Superintendent Brent Freeman thinks it is a great asset and is encouraging them to dream big, while he works to bring in the people who will help them make their dreams come true.

"We have 100 acres of farm forest," Rooklidge said. "We have Birnie Creek going through there with a run of salmon. John Doumit started a hatchery on Birnie Creek and Kyle Hurley has continued that. I would go to conferences and biology teachers were amazed we had 100 acres of forest."

"We've got kids out there managing the forest, doing everything from replanting, to running forestry plots, to measuring board feet per acre," Rooklidge said. "I've been doing amphibian surveys for years, and doing egg mass surveys, and snorkel surveys looking for juvenile baby fish. Couldn't we develop a laboratory where we have high school kids mentoring a fifth or sixth grader, and have a shelter around a beaver pond where they could go up there and have an environmental education place?" 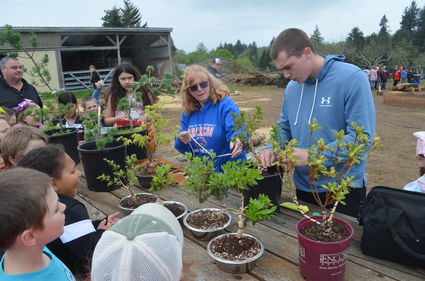 "The second thing we've talked about is building a system of trails that would not only benefit our kids, but also maybe give access to the community to walk a dog, or sit next to a bubbling creek or look out over the meadow and see the bald eagles circling," Rooklidge said.

Rooklidge also envisions displaying student artwork along the trail, interpretative signs, and sections of boardwalk in the wetlands.

"We'd like to develop something that would allow education, allow community to enjoy it, and also give our kids a chance to display their love of art," Rooklidge said, "Brent has challenged us, and said we've done amazing things; dream big."

So far, almost everything has been donated, including the fruit trees and blueberries. High school students were putting up a fence to keep out the deer on Monday, and the posts came from the farm forest.

Earth Day was just the beginning of exciting new developments at WSD.