Work is progressing rapdily on the painting and redecking of the Puget Island bridge. Above, a photo from the Washington State Department of Transportation shows painting progress as of mid-April.

Photos by the Wash. State Dept. of Transportation

Contractors working on the Puget Island bridge have returned to work for the season and are painting pier supports, doing touch up work and replacing walkway decking.

The bridge's steel structure has received three coats of paint. Workers for the prime contractor, Royal Bridge, Inc., are working with a subcontractor, Structural Coatings. 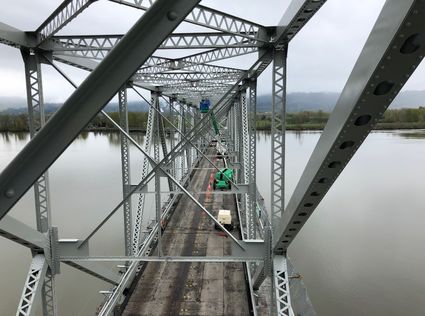 A view from on high: Workers use lift for touchup work where containment rigging was attached. WSDOT photo. Working on piers under the bridge, workers stand on wire mesh screens and are surrounded by containment curtains. WSDOT photos.

The abrasive cleaning and painting continues on Piers 17 and 18.

Meanwhile, Structural Coatings is cleaning and painting areas where rigging was installed for the containment curtains.

"Royal Bridge anticipates that the painting will be completed before the end of the year," Greenwell said. "That said, the work is weather dependent.

" Currently Royal Bridge is only anticipating two nights of closure associated with the paving activities on the deck. The closure dates have not been determined yet, and will not occur for at least another month."

The night time closures for deck work last year lasted from 9 p.m. to 5 a.m. During that time the Wahkiakum County Ferry Oscar B. was in operation, and emergency responders staged equipment on the Island for rapid response.