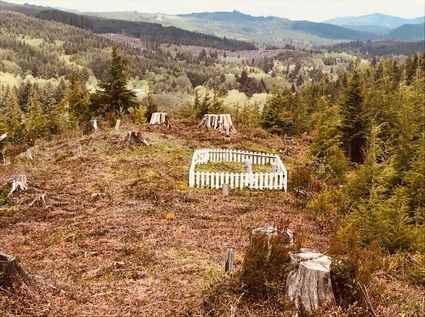 Gone, but not forgotten

While coming back from Altoona after taking pics of Pillar Rock for The Focus on Wahkiakum, I took a detour down to Eden Valley. I was not looking to write this story, but the inspiration that followed changed everything. While driving and perusing the landscape I realized that many of the old farm lands are overgrown with marsh grasses unfit for cattle. These early pioneers took sometimes decades to clear enough arable land to make a decent living as a farmer. They would do a variety of other jobs while clearing the land, mainly logging and fishing.

I was on my way back through Eden Valley when I noticed a van in front of the Eden Valley Cemetery with a work crew finishing up mowing the cemetery grounds. It was Bob Lipe, the work crew supervisor and his crew of five from the Naselle Youth Camp taking care of the grounds. He informed me that he has seven pioneer cemeteries he supervises the maintenance of. He takes care of Grays River Cemetery, Deep River, Eden Valley, Salmon Creek, and three others near Raymond.

That conversation led me to this story. He said it took two full weeks to clear the road and uncover most of the graves at Salmon Creek. He also said that the sign to the cemetery was not visible until he and his crew worked on it. My curiosity got the best of me and I had to see it for myself. The road up to Salmon Creek Cemetery was still a bit overgrown and tight driving up to the base path up to the top of the hill where the cemetery is located. Walking through this hallowed place with Finnish names everywhere indicated that these were people who lived hard lives in comparison to what we go through today. Anita Raistakka informed me that the Davis family donated the land and that her father, Waino Kilponen, used his logging bulldozer to build the road to the cemetery in 1977.

Although the cemetery sign says 1886-1929, the last burial was in 1930 with 82-year-old John Randala being interred. For those who were buried there, it was an all-day process to inter the deceased, especially carrying the coffin up a small path. One amazing feat is the over three-ton monument that took three wagons to haul to the top.

To see this place in disarray breaks your heart. The last known photo of Salmon Creek Cemetery was in 1985, and the trees were still there. The trees were cut down with total disregard to damage inflicted to this hallowed pioneers' site. At the base of the path is a mail box where people leave messages to say why they were there. Mostly they were there to visit their great grandparents' graves to find a connection. After the trees were cut, the result was foliage that grew up over everything, hiding even today the graves of many who were unsung heroes of a bygone era lost to all but a few. One small plot with only two visible headstones has a small white wooden fence placed by someone after 1985, replacing an old broken down chain link fence.

I do not want to see these graves decimated any further, and more work needs to be done. The families of those interred here got too old or died and could no longer take care of their loved ones. Can our county commissioners petition the State of Washington to place more funds to restore Salmon Creek Cemetery?

My apologies go out to Moon and Sol Mertz. In last week's story covering the Giants in the Trees benefit concert, I gave the wrong contact info to give to the Moon family. You can give to them at https://www.gofundme.com/f/moon039s-ms-fundraiser. Moon was diagnosed with MS last summer and during that time their medical expenses have increased exponentially. The treatments and testing are very expensive. She has Primary Progressive MS, a particularly disabling form of the disease and while the doctors say she was probably suffering from it for up to a decade without serious impact, when it did hit things went fast. She suffers from severe fatigue, must use a cane for balance issues, and has a variety of pains throughout her body. They really need your help to get caught up and to prepare for future medical expenses and loss of livelihood.

Just a reminder to set the date and time for the Grays River Cemetery cleanup on May 14 at 5 p.m. The Seal River Cemetery will have one on May 18 at 1 p.m. and everyone is welcome.

The Finnish-American Folk Festival hosted their 2nd concert last Saturday at the Naselle Community Center, followed by delightful desserts and coffee downstairs. The concert featured the Columbia Wind Quintet that surprised the nearly packed house. Kim Angelis on violin and Jennifer Goodenberger on piano shared numbers including some piano music from the famous Finnish composer John Sibelius. Pastor Anna Haugen from the Naselle Lutheran Church and her woodwind ensemble from the North Coast Symphonic Band captivated the audience. Carl Wirkkala and his cousin Lucas Homgren finished the night's performance singing original country music songs. This concert will help to offset costs for upgrading the new community art center. If you want to volunteer or donate then please contact Barb Swanson for more information: 360-484-3602. 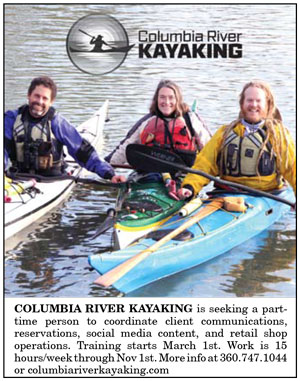