Above: Performers at the recent Naselle Community Center concert posed for a group photo. Below: The woodwind ensemble performs. Photo by Barbara Swanson.

The Naselle Community Center hosted their second concert recently to rave reviews and a large audience! Almost 100 visitors came from all over to hear the vast array of talent. Over $1,000 in donations were collected to help offset costs of upgrades and maintenance to the building. The event was a huge success! Local ladies brought homemade desserts and served coffee downstairs afterwards, and performers had a chance to sell CDs to excited participants.

The Finnish American Folk festival group paid tribute to Wilho Saari's kantele by playing his music while people were coming in to be seated.

Mike Swanson opened the concert and welcomed everyone. Barb Swanson gave a tribute to Wilho Saari and then introduced each performer with a short bio and introduction of their music.

The Columbia Wind Quintet began the program with some excellent selections. The quintet consists of: Pastor Anna Haugen on oboe, Erica Hiatt on flute, Judy Shatto on bassoon, Debbie Anderson on clarinet and Chuck Schroeder on horn. This was their first public appearance, and everyone loved them. 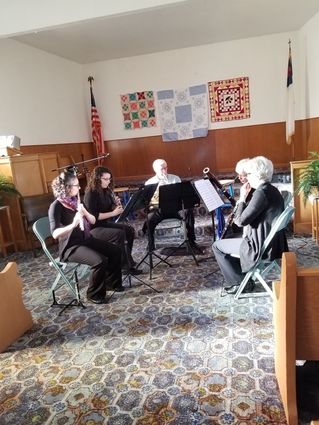 Carl Wirkkala, the well known country musician, and his cousin, Lucas Holmgren, were next on the program. They entertained the audience with original and local numbers that spoke to local community members. One of the favorites was "Angel Band," a number that was performed in Nashville. Other favorites included "Frankfort" and "South Fork Cannonball." The audience gave a thunderous applause when the concert was finished.

People left that night asking when the next concert might be happening. Stay tuned for coming events. Contact Barb Swanson for more information at 360-484-3602.