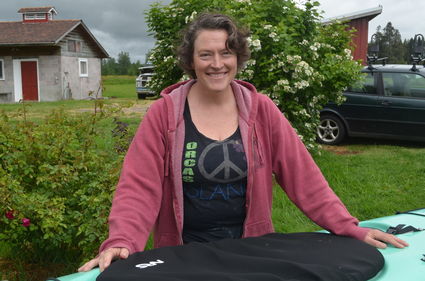 Kyleen Austin is leaving June 1 to paddle her kayak from Ketchikan, Alaska back to her home on Puget Island.

Kyleen Austin is going to have a grand adventure this summer while kayaking from Ketchikan, Alaska back to her home on Puget Island.

She will paddle solo through the Inside Passage, south along Vancouver Island and to the San Juans, then through the Strait of Juan de Fuca to Cape Flattery and the Pacific Ocean, where she will travel out past the surf zone and down the coast to cross the Columbia Bar.

"Since I was little I fantasized about going out into the wilderness for a length of time, of taking care of myself in the wilderness and being with nature," Austin said. "In my teens I thought about doing the Pacific Crest Trail and in my early 20s I walked certain segments of it just to get a feel for it. Then it just exploded. There wasn't enough aloneness in that for me."

Five years ago, she had a dream that she was paddling amidst beautiful mountains and canyons. When she awoke, the place had registered in her mind as the Inside Passage, even though she'd never been there.

She told a friend, a fellow kayaker. Later, that friend posted a picture of Austin making a Greenland paddle, and noted that she would be using it to travel the Inside Passage.

From that moment on, the dream became a goal.

Austin hoped to do it when she turned 50, but she wasn't ready. So at 53, she finds herself "physically, mentally, skillfully, emotionally ready to do this."

Her kayak is really stable and fast, built to be on the sea for days on end. It can hold 200 pounds of gear and the paddler. She's installed a foot bilge pump to empty water and set up sailing rigging to sail.

"I'll have days when the current is in my favor, and then I can take days off and explore," Austin said. "This is not about getting from Point A to Point B. This is me finally getting to make myself just be, be aware of everything that is going on, anticipate what might be around the next bend, but not worry about anything but how many whales, and dolphins, and porpoises, and sea lions, and birds that I get to see."

The biggest day could be a 40 mile crossing of Queen Charlotte Sound. There is no place to take out there.

Safety and solitude worry her friends, but she is prepared for one and comfortable with the other.

"I am an introvert. As far as just being with myself, I love that," Austin said. "I'm never going to be hundreds of miles from another person. There is so much fishing traffic, commercial traffic, cruise ships, other kayakers. I will be running into other people.

"In terms of safety, I have redundancy after redundancy, including a VHF radio, a satellite hub, a phone, a hand cranked radio, and more."

As far as bear, she's prepared for that possibility too.

Austin plans to fish and forage. She hopes to acquire a third of her food, but she will pack enough and have more shipped to some of her stops, so that it will never be a problem.

"This isn't about challenge or danger, this is about sight seeing," Austin said. "And maybe this isn't once in a lifetime. Maybe it's just the beginning."

Austin is a kayak guide, part owner of Columbia River Kayak, and a musician. To follow along on her adventure, check out her blog, kyleenaustin.com.

Everyone is invited to a send off party for Austin on May 31 from 3 p.m. to 5 p.m., at Stockhouse Farm on Puget Island, 62 West Birnie Slough Road. She will have all her gear and charts on display and will be glad to answer questions and talk about her plans.