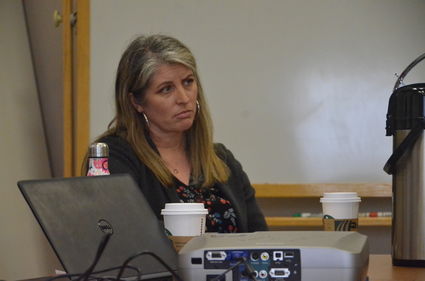 Kessina Lee, regional director for the Washington Department of Fish and Wildlife, listened to public comment at a meeting with Wahkiakum County officials and citizens on Monday.

Wolves and fishes--those were the topics addressed with Washington Department of Fish and Wildlife (WDFW) officials visited the Wahkiakum County board of commissioners Monday.

The group shared points of view on management of salmon stocks; WDFW staff talked about the expansion of wolf populations in the state, and all agreed that similar discussions should continue in order for the points of view of rural residents to be heard in fish and wildlife management issues.

Local officials and county residents expressed frustration with salmon fishing opportunities. With low spring chinook runs forecast for this year, recreational fishing has been severely limited and allowed only upstream of St. Helens, Ore. There has been no commercial fishery.

The restrictions have economic impacts, the local officials said.

For example, Port District 1 probably lost $130,000 in revenue that would have come from a spring chinook fishery, said Jackie Lea, port manager. That loss spilled over into local businesses that would have sold food or fuel to anglers, she said.

Two factors were the major cause for the restrictions, WDFW staff said.

One has been poor conditions in the ocean for the past few years, said WDFW staff member Bryce Glasser. Fishery agencies say the same number of juveniles that produced record returns a few years ago are now coming back in very low numbers.

A second has been a uniquely poor Chinook return to the Cowlitz River Hatchery, said Ryan Northrup. Federal fishery regulators required harvest managers to come as close to catching none of those fish as possible, he said, so fishery managers had to curtail harvest below the mouth of the Cowlitz and Lewis rivers, which was also seeing a low return.

Overall, Northrup explained, harvest levels are guided by the number of fish from endangered stocks that are incidentally caught alongside hatchery fish.

While Chinook salmon returns are expected to be very poor this year, the fall coho run should be very strong, Northrup added, allowing both commercial and recreational fisheries this fall.

Skamokawa resident Kent Martin, a commercial fisherman, commented that the Fish and wildlife department needs to take a new stance on harvest, recognizing that commercial fisheries on hatchery fish give hatchery programs funded by federal dollars a reason to exist.

Hatchery and wild stocks, many considered endangered species, swim side by side, and when fisheries are limited to protect endangered stocks, hatcheries often have surplus returns.

"We need to have ways to harvest these fish," he said. "If we don't harvest them, there's no point in having them."

"I think, Kent, you hit the nail on the head when you said hatchery surplus is a problem," he said. "The challenge is getting a balance of hatchery and wild fish."

WDFW Regional Manager Kessina Lee said it is helpful for her and her staff to come to rural areas and discuss issues.

She also encouraged local officials and residents to attend regional public meetings on fish and wildlife issues to make sure their voices are heard among the voices from more populated rural areas.

On a second discussion topic, Lee and staff described the slow spread of wolves in the state and a possible plan to capture and relocate them.

Wolves are still classified as an endangered species in Washington, but the population is growing and will eventually reach a point where wolves can be delisted, as has occurred in Idaho and Montana.

Lee emphasized there are no plans or proposals to introduce wolves into Wahkiakum County; WDFW officials are just going to all counties to discuss wolf management.

Wolves have moved into northern Washington from Idaho and British Columbia, said wildlife biologist Eric Holeman. There is a also small population in the Blue Mountains.

Single wolves can travel hundreds of miles before joining a pack, which is defined at a minimum as a breeding pair; packs are territorial and don't roam, he said.

The department has been mandated by the legislature to analyze translocation as a tool for delisting, said Lee.

"Is this a tool that you want in the tool box for recovery?" she said. The agency will hold public meetings this fall around the state to gather input on the topic.

"They (wolves) are coming," she said. "So start the conversation early to be prepared."