On the refuge: White-tail numbers are expanding 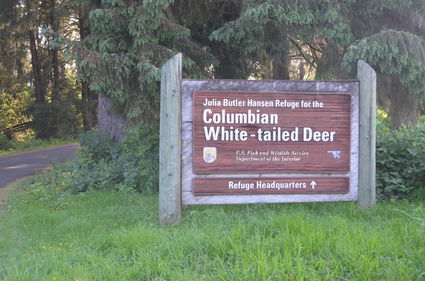 Though a scenic through way along the Columbia River may never be recovered, what seemed to be a setback at the Julia Butler Hansen Refuge for Columbian White-tailed Deer a few years ago has led to positive outcomes for salmon and waterfowl habitat, all without an adverse affect on deer population.

“I think it was 2011 when we first noticed that Steamboat Slough (dike) was washing out,” Paul Meyers, a wildlife biologist for the U.S. Fish and Wildlife Service, who has been at JBH for 10 years, said recently. “It took a long time to sort of get to a solution for it, because it was during the sequester and money was tight. Bonneville Power Administration came in and said we can build a setback levee to get the salmon restoration credits that they are trying to get throughout the lower Columbia.”

The U.S. Army Corps of Engineers built a setback levee and created channels for fish habitat before breaching the dike along Steamboat Slough Road in 2014. The breech severed a public through-road along the river and sloughs, and the refuge lost 70 acres of deer habitat to the project, but the good news is that it isn’t hurting their numbers.

“About 80 percent of what we do here is deer and that is sort of the primary purpose of the refuge, but we also manage for other species,” Meyers said. “Waterfowl is always a big one. This is always a big winter waterfowl place. Other species that we see may be of concern. There is a nesting colony of white pelicans nesting on Miller Sands now which showed up about five years ago. That is a species of interest that we spend some time on, trying to monitor and doing what we can to manage those.”

Prior to the breach, USFWS was unsure of the outcome or how to move forward, so they decided to move as many deer as they could to another location.

“When you remove deer from an area where there are deer, they tend to rebound rather quickly,” Meyers said. “I think there were 90 deer on the refuge when we did this, and we removed almost half that number, so we were down to about 50 deer and within about three years it was back to 100 deer.”

“That’s resulted in a very nice population of deer at Ridgefield,” Meyers said. “That’s been an additional secure sub-population which counts toward recovery of the population. So that was super successful as well. We don’t have the final count, but I think it’s safe to say there are over 200-250 deer down in Ridgefield right now, which is pretty good. It’s about 5,000 acres. So it is a lot bigger than this area. It can support more deer just because of its size.”

The fish and wildlife service manages the refuge for about 125 deer, according to Meyers, so 100 deer is pretty good.

“It puts us at about 25 deer per square mile, which turns out to be similar to the density of deer at Ridgefield.

Curiously, there are more than 200 white-tailed deer on Tenasillahe Island, formerly the site of a dairy.

“The density on Tenasillahe is incredible,” Meyers said. “It’s probably some of the highest density of white-tailed deer in the nation. It’s probably 50-60 deer per square mile.”

Numbers have been increasing throughout the Columbian White-tailed deer habitat, and according to Meyers, the endangered species was down-listed to threatened three years ago.

Each of the areas that comprise white tailed deer habitat have different management prescriptions, Meyers said. Recovery is a slow process.

At one time, the deer were concentrated in the valleys along the Columbia and Willamette Rivers.

“The Willamette Valley used to be a mixed prairie, an oak savanna: a really good deer habitat,” Meyers said, “200 years ago there were deer everywhere.”

After the area was cleared for agriculture, they disappeared. Except for Douglas County in Oregon, where white-tailed deer population climbed enough for them to be de-listed, the deer have not returned to the valley.

Along the lower Columbia in 1972, when the refuge was formed, the population was limited to Puget Island, Tenasillahe Island, Westport and the what was formerly known as Skamokawa Island, where the refuge is today.

“Now they are all the way down to Ridgefield, Vancouver Lake, Sauvie Island, and Shillapoo,” Meyers said. “That’s all the result of translocations, or physically picking up deer and putting them into these areas.”

“Even though it looks like we’ve really increased the population from an overall big picture sense, it’s still a pretty small area that they’ve recovered in,” Meyers said. “But there are about 1,200 deer now. We started out in the 300-400 range. It’s been a long haul.

“You wouldn’t think a deer would be so hard to de-list, but it’s not so much biology as it is social, political issues, It’s hard to convince people that moving an endangered species around is a good idea.”

They have a lot to tackle from a biological perspective, in order to increase the population. As stated earlier, each section has its own management prescription. At JBH, one of their prescriptions is to plant trees.

JBH had been forested at one time, but like the Willamette Valley, it was cleared for agriculture.

“There a lot of big wide open areas,” Meyers said. “Deer are fairly risk averse. They don’t like to be out in the open. They don’t usually like to get more than a hundred meters from some area of cover that they can dash back to. So when you reduce the amount of cover there is, you’re really reducing the likelihood that they are going to be comfortable in that area. There is a lot of exceptions, but in general that’s true.”

Fish and wildlife have set about planting trees. But there are always obstacles of one kind or another. One such obstacle is universal. The budget.

“The only areas where there are legacy forests are down by Skamokawa and in the center section,” Meyers said. “All these trees have been planted in the last 20 to 30 years. We continue that. We try to get in as many as we can afford every year, but it is a long, slow process. The original thought, I think, when fish and wildlife service took over management of this area was to remove all the agriculture and let this area come back naturally.”

“Reed canary grass is about the worst,” Meyers said. “It’s a grass that thrives really well in wet soils. It was brought purposely to the U.S. for cattle grazing in wet areas. Cattle can do pretty well on it, but they have a different digestive system than deer do. They can eat it when deer can’t. Deer can only eat it when it’s really young.”

“It’s a slow process,” Meyers said. “We plant trees and sometimes we have to go back to those lots and plant some more.”

“It’s very hard to get rid of,” Meyers said.

That’s one reason they graze at the refuge. The cattle knock down the grass, but as soon as they stop grazing the grass takes over again. It’s got them considering other options.

There is another invasive species that affects the deer population in a more direct manner. Coyotes.

“I’ve heard different stories about when coyotes first came here,” Meyers said. “They never made it past the Cascades until the wolves were gone. Then coyotes started showing up. Coyotes can do a lot of damage. They can create a lot of fawn mortality. That’s one of the issues we deal with here.”

“Back in the 80s there was a spike in the population of deer after this became a refuge; you no longer had agriculture on here and you just had a ton of stuff growing here. You also had a parvovirus outbreak in coyotes and so there was really low predation and a tremendous food supply. We peaked out at 500 animals. Which was unsustainable and crazy dense. As expected that started to crash and it crashed pretty hard, and now we’re back up at a more sustainable level.”

They’ve been seeing a lot of coyotes this year, according to Meyers, and they will be watching fawn survival.

“It goes in cycles,” Meyers said. “All populations do this. The deer population has been on an upcycle. We’ve been really good for the past five six years or so. So I don’t know. We’ll see how that goes.”

Most of the growth in population is mostly from the fact that we are getting more fawns surviving than adults dying, he noted.

“In general, this population, and I mean the whole thing, has fairly high mortality rates,” Meyers said. “We’re looking at 20 percent a year for does, and 40 percent for bucks. So you’re looking on average 25-30 percent mortality per year for adults. That’s a lot of deer dying.”

“They don’t have a real long life span,” he added. “There are some deer that will live to be 12 or even up to 20 years old. But most of them die after five or six years. It’s various things. Some of them are preyed upon, some are not healthy to begin with. There are some diseases out there that will get them as well. Vehicle strikes are a big one.”

“The point is, with that high of an adult mortality, you have to have a pretty high fawn survival rate to offset that. So when you have a lot of fawn predation, that is what can set you back,” Meyers said.

Management isn’t just about biology or about how humans affect deer population, it’s about how the deer affect the human population, socially and politically.

“When you look at the places where we have moved deer to,” Meyers said, “we have had to work with all of the landowners and state agencies. We can’t just pick deer up and move them anywhere we want. If we did, I’d move them to Vancouver, because they do great in the cities. But we can’t do that, because there are effects on the social environment.

“Around the country, there are really good examples of urban deer populations,” Meyers explained. “There are little greenways where they can survive and probably do quite well. But once you do that, they probably aren’t going to stay there. They’ll go into these areas and find gardens, so you can’t in good conscience create a situation like that.”

“So every time we want to create a new sub-population it takes years because we have to figure out how to do that without affecting the social environment,” Meyers said.

After explaining the mission at JBH, Meyers’ thoughts returned to the changes resulting from the setback levee and subsequent breach of the dike.

“The take home message is that the BPA project was a win-win situation,” Meyers said. “BPA got some really good salmon habitat. That area is pretty darn productive even though it’s no longer deer habitat. And we were able to establish a new and very successful sub-population at Ridgefield.”