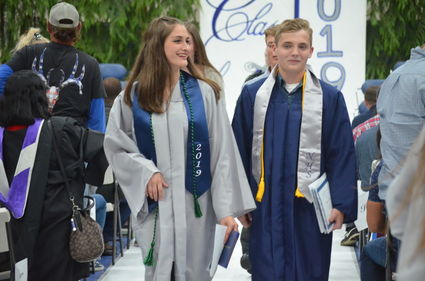 Naselle High School's Class of 2019 graduated last Saturday, and Holly Disch grinned at friends and family as she and Parker Dalton made their way out of the gym and headed to the reception.

The Naselle High School Class of 2019 graduated in front of a crowd of friends and family on Saturday.

Class Speaker Jacob Eaton began by thanking the crowd for all their support over the years. Then he began to reminisce. At one point, he compared his third grade classroom to a black market.

"There was a lot of trading going on," he said. "By the end of the year, I'm pretty sure Parker (Dalton) had everyone's school supplies."

"I couldn't ask for a better class," Eaton said, comparing them to family.

"Find something or somebody you love to stick with," he told them. "It sounds like one of the most fulfilling aspects of life is doing something you love so that you can enjoy each and every day and I wish that for all of you." 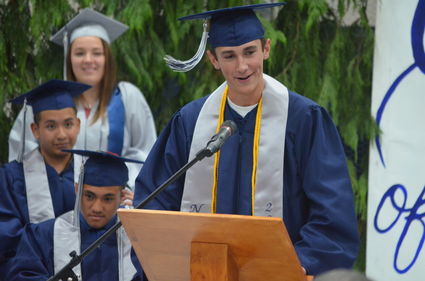 Class Speaker and Salutatorian Jacob Eaton addressed his class and the audience, sharing anecdotes and advice, and even quoting the "great" John Wayne. "Tomorrow hopes we have learned something from yesterday."

Many will be attending community college in the fall. Most will stay nearby, attending Clatsop Community College, while others are headed to Clark College. Two are headed to Washington State University. One will study at Seattle Central College, and another is headed to George Fox University.

The class motto were wise words from one of their very own classmates, Saleana Patterson.

"We tend to take life for granted. We're not permanent, and it's scary. However we cannot dwell on our fears. We should stand tall and move forward. We shall take the people important to us on our journey and make a difference. We'll progress and look to the future and, no matter what, love ourselves."

After scholarships and awards were announced, the diplomas were presented. Tassels were turned and it became official as Superintendent Lisa Nelson introduced the Class of 2019.