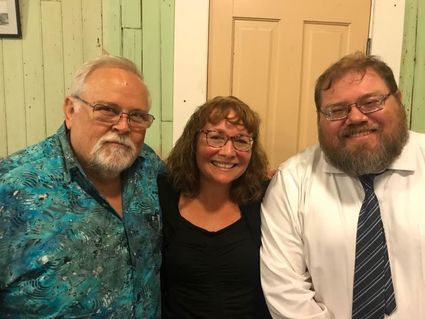 "The coldest winter I ever saw was the summer I spent in San Francisco." This is a quote that has been credited to Mark Twain, but has not been verified. True or not, Mark Twain has not to my knowledge been in southwest Washington in June. It has been so cold this month we should rename the month "Juneuary" in honor of Jack Frost's late departure. For those of you who are relatively new to the community and for those who have been here forever, you may still like to have the following information:

We live in an area that gets on average 94 inches of rain per year, while the US average is 38 inches of rain per year. The county averages four inches of snow per year, and the US average is 28 inches of snow per year. Usually there are 126 sunny days per year in Wahkiakum County, whereas the United States' average is 205 sunny days. Wahkiakum County gets precipitation of some kind about 187 days per year. Average summer high in July is 73 degrees and 35 degrees in January. In the county, there are approximately four days yearly when temperatures get over 90 degrees, and there are approximately 50 days a year that the low temperature falls below freezing, which is about average compared to other places in Washington. I have also noticed that in Wahkiakum County, there are no days every year when the low temperature falls below zero.

November is notably the rainiest month in Wahkiakum County with approximately 15 inches of rain with 21.5 days of rain, and the driest month is July with about less than two inches. The wettest season is spring with 41 percent of yearly precipitation, and 7 percent occurs in autumn, which is the driest season. August is also dry with only 6.8 rainy days. Wahkiakum County is less snowy than most places in Washington with February as the snowiest month in the Westend with just under three inches of snow, and three months of the year have significant snowfall.

Suffice it to say that most of the local farmers have told me that their rule of thumb for planting, if you do not have a greenhouse, do not plant until the first day of June. The way the cold has been here lately, you can understand why. Not knowing what to expect concerning the weather here, I was another one who tried to plant things early only to see the plants suffer or die. It can be frustrating, but thankfully I have had wonderful help from those here who have been there and did that. Now I know what will grow well here without a greenhouse.

A small crowd met for a meet and greet gathering at the Grays River Grange #100 June 19 to meet Judge Donald Richter. Judge Heidi Heywood introduced him to those in attendance. County Commissioner Gene Strong for District 3 was also there to meet the public. Judge Richter has been appointed by Governor Jay Inslee to replace Judge Goelz as Superior Court Judge for both Pacific and Wahkiakum Counties. Donald and his wife Christine and their seven children live near Raymond. You may see him and his wife occasionally at the Rosburg Store having a burger. Say hello, they are very amicable.

Johnson Park is looking for board members to help coordinate the facility. If anyone is interested in volunteering please contact current Johnson Park president Shonda Ware at 360-465-2722 or Toni Fest at360-465-2393. Their sewing room is open from 12-3 p.m. every Tuesday. WIC will be at Johnson Park by appointment only once a month from 9 a.m.-3 in the afternoon. Movie nights have been cancelled until further notice. They have building wide Wi-Fi for your convenience. The password is publicguest. Wahkiakum County Legal Clinic will be at Johnson Park in Rosburg on July 12 from 3-4:30 p.m. They will assist with legal problems in family, housing, consumer debt, public benefits, disability, and others. Cases are reviewed on a first-come, first-serve basis. Call 360-795-6401 for more information.

Johnson Park's Outdoor Café in Rosburg started on June 15 and will have a summer of fun be from noon until 2 p.m. for your children. There will be crafts, activities, games, produce, and a healthy lunch. It is all free. For more information call 360-465-2310 or come by on June 18 at 10 a.m. to learn more. This is for children of all school ages. This is to build healthy children for a better community.

For those who would like to know more about the area, then I would suggest a visit to the Appelo Archive Center located at 1056 State Route 4 in Naselle. There is a lot of information to peruse as well as a café to satisfy your hunger while you read The Wahkiakum County Eagle.