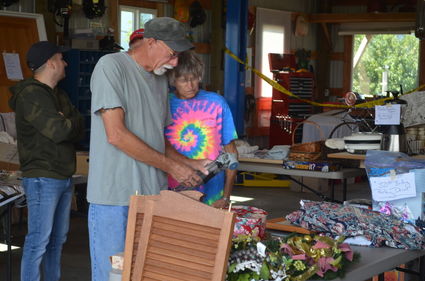 It was another successful weekend for sellers and shoppers at the annual Puget Island Garage and Yard Sale. There were 62 sites this year, dotting Puget and Little Island. As per usual, enthusiastic shoppers were ready and waiting for garage doors to open on Friday morning, but the pace remained steady if a bit slower the rest of the weekend.

Shoppers stopped by the Norse Hall, where they were offering pulled pork sandwiches, to rest a bit and converse, get something to eat, and plan their next attack on PIGYS sales. 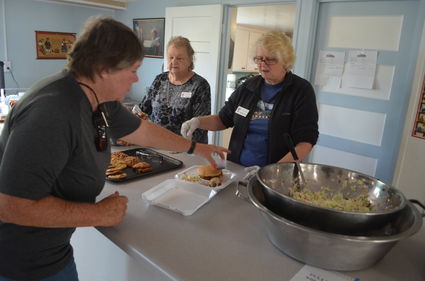 PIGYS organizer Sandie York seemed pleased with the turnout and the weather on Saturday. She was boxing an item for a shopper at her own yard sale on School House Road, and they were talking about her years working in retail. The department store she worked at may have closed, but York has found a way to keep doing her thing.

Top right: Talk proved to be just as important as shopping. While one couple quietly perused the treasures on the tables, conversation flowed in the background. RIght: Cowlitz County resident Mike Foote is new to woodworking and was pleased to find some tools for his hobby. Below, middle: Pulled pork sandwiches at Norse Hall. Below, far right: There were several sales going on at one site just off the Puget Island bridge. Mother and daughter check out tiles on one table that was filled with items that might be interesting for anyone considering a kitchen renovation.