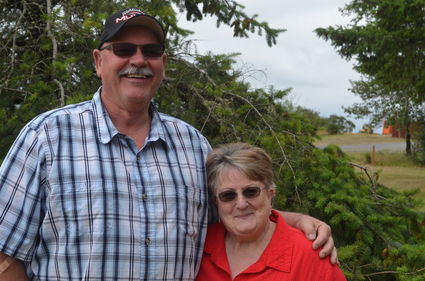 The two were raised in Wahkiakum County, were high school sweethearts, and have spent years working and volunteering in the community.

“We dated in high school, then we went our separate ways for a year or two, but then she bought a shotgun,” Lee said early in our conversation.

“Are you sure you want to interview us?” Diane asked.

When the two were first married, Diane worked at a seafood place in Astoria and Lee worked at the lumber mill in Warrenton. After Lee took a job with Crown, they returned to the area, and Diane started working at Wahkiakum County Courthouse.

She worked there for 43 years, starting and finishing in the Auditor’s Office. She began by handling licensing and ending up running the office as Auditor from 1989 to 2017.

The best part about the job was the people, according to Diane, and she goes back to help out any time she can.

“She was steadfast at the courthouse, I hopscotched a little bit,” Lee said.

After Crown, Lee bought his own truck and hauled freight in the area for eight years. Then he drove a log truck for DeBriae Logging. When there was an opening with the Wahkiakum County Road Department, he took it and stayed with them for 28 years.

But one person’s retirement isn’t necessarily the next person’s retirement. Lee decided to drive a bus for Wahkiakum School District. It works out well. He gets summers off and doesn’t miss any of his granddaughter’s sporting events. He just drives the team to their away games. As a volunteer, Diane goes too.

For Diane, it’s been a huge adjustment to go from working every day for 43 years, to not having as much structure.

“She needed that,” Lee said. “That’s what retirement is about. Chill.”

She’s been watching old movies and catching up on her reading.

When I asked what old movies she’d been watching, Lee started laughing.

Their daughter, Tiffany, who was nearby, could be heard laughing.

“I look at our DVR trying to find a football game I saved and there were like 600 Hallmark movies,” Lee said.

Meanwhile, Lee’s been working on their ‘50 Ford convertible.

They’ve sold two of their classic cars in the last two weeks, and his garage is feeling a little empty.

For 15 years, they held what they called Fifth Quarter at their house after every home football game.

“It was fun, Diane said. “It was fun seeing the variety of kids.”

“I’d do a recap of the game with a bit of humor,” Lee said. “We made senior books for all the football players.”

Then they got involved with Dollars for Scholars, starting with a sturgeon derby to raise money for scholarships, but when that ended, the Rods and Reels Rod Run car show began—and that grew and grew into a very popular and successful event in Skamokawa.

The two spent a lot of time organizing the event every year, and were able to raise over $200,000 in the 13 years it ran.

“I didn’t dream that it would become the success it was,” Lee said. “Every room in town was filled.”

Lee is on the board for the Wahkiakum Chamber of Commerce. He works on the sideline at home football games and drove princesses around the track at Homecoming for several years. He was on the Wahkiakum School District Board of Directors for 16 years. He’s a Puget Island Fire District Commissioner. He’s a Wahkiakum County Port 2 Commissioner. He’s on the Law and Justice Council. He’s on the Civil Service Board. He’s a member of the Broadband Committee. He was on the committee for the Skateboard Park.

“When he retired he said he was going to quit doing all this stuff,” Diane laughed. “But it gets him out of the house. Then I can watch my movies.”

It takes a lot of time to get through 600 Hallmark movies.

Why did they choose to be so active?

“I think we kind of grew into it,” Lee said. “When we moved back into this community, we just loved it here. The community has given a lot to us, it’s good to give back.”

Diane would like to encourage younger people to volunteer in their community, because it’s been such a blessing in their lives.

The Tischers raised two girls, Tiffany and Darcy, and have three grandchildren, Leanndra, Mari, and Louis.