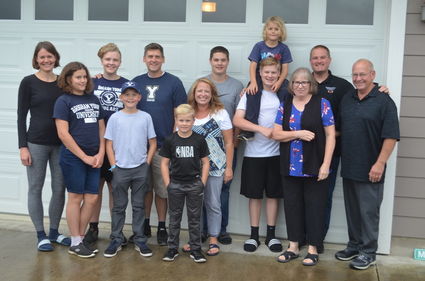 "May the road rise up to meet you" was the phrase that echoed in my mind after meeting the Fischer family from Oldenburg, Germany.

The family of six was near Dismal Nitch, just a few miles short of the only state in the continental US that they hadn't visited, Oregon, when their truck and the trailer went off the road and rolled over into a ditch last Friday.

I don't think that old Irish prayer is referring to that kind of road rising. Rather, it seems to me, it is about trusting that life will provide everything you need, when you need it.

That day it was Sgt. Brad Moon of the Washington State Patrol and his wife, Shawna. And their kids. And Shawna's parents, Von and Valonne Freeman.

"We had it in the back of our minds to do, wouldn't it be nice to do it one day?" Melanie said. "Two years ago, we decided to do it. The kids were a perfect age."

The Fischers have also been documenting their travels for their friends on a Youtube.com channel, "50 in 365."

"We just thought people needed to know how positive it is here, and the country is beautiful and there are a lot of nice people," Ben said.

This wasn't their first visit to the US. They both attended a university in Utah, and three of their four kids were born there. Melanie earned a degree in Visual Arts, and Ben in International Studies with an emphasis in Global Trade.

They won a green card lotto and moved to Seattle, but returned to Germany a few years ago to be near family.

After they decided to do this trip, Ben went on a TV show, similar to Big Brother, in an effort to raise money for the adventure. He was in a house with 99 people over the course of three weeks. The last person to remain won 100,000 euros. The first person left after two hours, but Ben lasted 19 of 21 days. He didn't win the money, but he lost 20 pounds.

"They didn't feed us very much," Ben said. "They gave us one potato, half an apple, and a walnut, and we were required to play games to earn money for food."

They began their journey in Florida, a favorite place for all four of their kids, who also loved Utah. Washington state got some love from the young ones as well, and there was one vote for South Dakota.

They broke down in Illinois. They spent four weeks in Massachusetts, where they met a nice man who let them use his minivan to tour the area while they waited for their truck to get more repairs.

When they broke down in Texas, they were stuck at a campground, unable to shop for supplies. A neighbor came over the day they ran out of food and water and handed them keys to a vehicle.

And it pleases them to be able to give back.

They had extra coolant left over after one visit to a mechanic. Twice they were able to help people who had run into car trouble and just happened to need, of all things, coolant.

"I think the biggest thing we learned was to be spontaneous," Melanie said of their trip. "To take every day and every moment the way it comes. And when something happens, not to give up or get frustrated or mad. It doesn't help. It always worked out."

"We're not happy that this happened," Ben said of the accident, "but we wouldn't have gotten to know the Moon family."

For now, the family is staying in the Freeman's gym and making tough decisions about what to take and what to give away as the six go from living out of a truck and trailer for nearly a year-to a minivan.

They will continue as they had planned, to visit the final state on their 12 month tour, Oregon, and see the Redwoods in northern California.

They got to see a little bit of Alaska, but hope to return to see more one day, and another time, Hawaii.

"It's been a great experience altogether," Ben said. "We are grateful to the Moon and Freeman family for taking us in."

"I don't know what we would have done without them," Melanie said.

"Brad went to work on Friday, like normal," Shawna said. "He called and said, 'I've never called you before but I need you to come. There is this wreck by the bridge, and this family who has nowhere to go.'"

"I thought I would be taking them to a hotel and get them set up and then I got there," she added.

It took two tries to get the truck and trailer out of the ditch. On the first attempt, the shell of the trailer, which had already broken open, fell back into the ditch and came apart a little more, pitching more of the family's earthly goods for the last year onto the ground. Some of the kids started sobbing.

"Can I take them home?" Shawna asked Brad. She called her parents, who have a gym attached to their home, and they answered in the affirmative. Then she called her four boys, Isaac, 17, Eli, 16, Gabe 15, and Josh, nine, and asked them to set up the air mattresses and cots.

It was just as well. The clean up took hours.

The accident happened at 4 p.m., and the tow company finally got everything back to their yard at 2 a.m., Brad said. The axle had broken.

"I just couldn't take them to a hotel and dump them," Shawna said.

Brad felt the same way, he just knew it a little sooner.

"I'm there with them at the scene right after the wreck," he said. "Probably the most difficult part of this entire thing for me was making this phone call to try and tell my wife I've found these people on the side of the road and I'd like to bring them home."

He was amazed at how calm they all were. 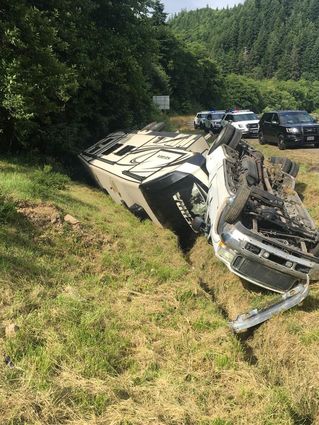 Courtesy of the Washington State Patrol.

The Fischer's truck and travel trailer as it rests in the ditch on State Route 401 near the Washington/Oregon border.

"'You know, it was good thing this happened on day 320 as opposed to day five,' Melanie said to me," Brad remembered. "'The things that we've gone through in the last year prepared us for this.' It was another step in the adventure. as opposed to, oh my goodness, my whole world is crashing down."

"They're incredible people," Brad added. "It's been very fun. The kids are enjoying it."

They really have been. There have been card games, scavenger hunts, bonfires, and more.

Josh, who is 9, has enjoyed it so much, he's decided to study German for four years in high school and travel to Germany to visit the Fischers.

"It felt right at the time," Brad said of their decision to take the Fischers in, "and it's felt right since. It's been very rewarding for me, us, and for my kids." 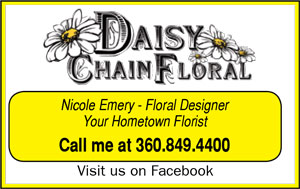