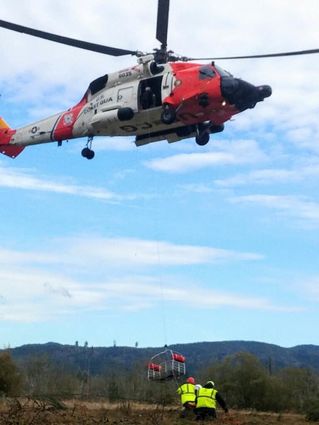 I have only touched on a small part of what search and rescue is all about. Wahkiakum County Search and Rescue does have four K-9 teams including trailing, air-scent, and evidence search. Their K-9 teams work with a trainer, attend conferences, and practice in order to maintain and improve their skills. They are proudly sponsored by AKC CAR, Cowlitz Animal Clinic, Healthy Hound, Intervet, Mule Country Pet Sitting, and Petco.

David Morris, who is curator of aircraft at the National Museum of the Royal Navy, chronicled the 100-year history of Royal Navy Search and Rescue (SAR) in his book. The first authenticated mention to an aircraft attending an emergency would be on August 14, 1911. Outside of Chicago on the banks of Lake Michigan during an air pageant pioneer aviator Hugh Armstrong Robinson was flying his hydroaeroplane (float plane) when he noticed fellow pilot, Rene Simon, had force landed his own airplane onto the lake. Doubtful if his friend was injured or alive, Robinson changed course and flew out toward the scene of the accident. Robinson's aircraft was equipped to land on water so he made a landing and came alongside Simon's crashed aircraft. Simon was uninjured, and Robinson was able to remain with him until a boat came to retrieve Simon from the water. Although it wasn't a complete airborne rescue, this early use of an aircraft for emergency support indicated the capability of aircraft for such an answer.

The Grays River Grange #124 will hold their Farmers Market on Tuesdays from 2 p.m. until 6 p.m. at the Grange Hall until harvest is complete and the produce sold.

The Outdoor Café will be open from noon until 2 p.m. at Johnson Park in Rosburg with a summer of fun for your children. There will be crafts, activities, games, produce, and a healthy lunch. It is all free. For more information call 360-465-2310. This is for children of all school ages. This is to build healthy children for a better community. Johnson Park is the place for those of you who are new to the area and are in need of food, and then I suggest you come to the West End Food Pantry every Thursday from 1-5 p.m. The food for you is free at no charge. The pantry is more like a little local grocery store. Johnson Park is looking for board members to help coordinate the facility. If anyone is interested in volunteering please contact Shonda Ware at 360-465-2722 or Toni Fest at 360-465-2393.

For those who have attended or are planning to attend the Naselle/Grays River Valley Seniors luncheon on Wednesday, those who are 55 and older can join; also the potluck will be at the Valley Bible Church on every fourth Wednesday. Anyone interested in renting the Rosburg Hall is encouraged to contact Sonja Kruse at 465-2251 or Dee Nikkila at 465-2595. Thursday luncheon at noon at the Rosburg Hall is sponsored by the Community Action Program (CAP) out of Kelso/Longview. Any questions, contact Denise Rae at (360) 425-3430 extension 259.

The Finnish American Folk Festival of Naselle, is seeking artwork for their next festival. This artwork will be used for advertising on posters, postcards, programs and on festival merchandise including t-shirts, aprons, coffee mugs, and more. They are interested in some variation of the theme of 2020. The festival takes place July 24 - 26, 2020, and it is the 20th anniversary of the folk festival in Naselle, which takes place every other year. The artwork should be 8x10 in size, and no more than three colors. Please include your name, address and phone number with the artwork submission. This call for artwork is due August 20, 2019, and can be submitted to: FAFF, P.O. Box 156, Naselle, WA 98638, or submitted electronically to juboggs@wwest.net. The festival committee will vote on submissions received at the August 30 meeting. The winner will be notified by September 1. The festival has a marketplace located in the gym for vendors to sell their artwork. The winner will receive $100 and a free vendor booth space (12x10) at the festival in 2020, to sell their artwork.

In honor of American Legion's 100th birthday, Deep River Post #111 invites all Naselle/Grays River residents to a community picnic on Saturday, July 2 from noon until 3 at the Lions Baseball Field in Naselle. Hamburgers, hotdogs, and other food items will be provided. Please come and join them in a birthday celebration of the veteran's organization in 1919 by World War I service men and women. The post mini-jeep and cannon will be there for the children to enjoy.