Robotics program is taking off 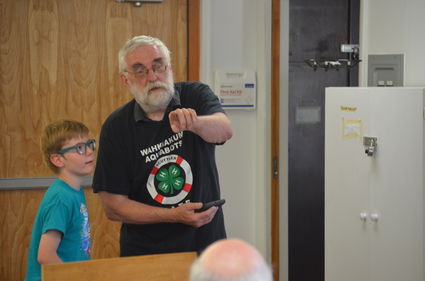 Ron Wright, who is active in the Wahkiakum 4-H and Wahkiakum School District robotics programs, gave a presentation on his work with students to an audience at the Wahkiakum Outdoors program at the Hope House on Tuesday evening. After talking about his work, he and a volunteer, Colin Odom, showed the small crowd how to use a drone and a robot.

"I was absolutely overwhelmed when I watched these robotics presentations," Mike Passmore said in an introduction to his latest guest for his Wahkiakum Outdoors program at Hope House. "The kids are doing absolutely amazing things."

The robotics presentations Passmore was referring to were given by students at Wahkiakum School District, and kids involved in the Wahkiakum 4-H Robotics program, which have largely been driven by Tuesday's speaker, Ron Wright.

Wright began with a little history about education in the United States, and how it's changing, even here in Wahkiakum County.

"The current model of education was actually invented in about 1840 in Boston," Wright said. "The real purpose was to get everyone thinking alike, acting alike, responding to the foreman. The teacher was the foreman. Because of that, we did remarkably well. We became number one in the world, economically."

"Through the factory model of education, we were just cogs in the wheel," Wright said. "The education system tried to figure out what it was supposed to be to support the new economic system. We are finally figuring it out."

Wahkiakum School District is adopting what Wright describes as "the entrepreneur model of education," where they hope to create lifelong learners who can work in teams to creatively solve difficult problems.

According to Wright, the three main themes the district is choosing to focus on for their students include natural resources, citizenship, and engineering.

Wright is concentrating on the third piece, engineering.

Their goals through the robotics programs are to make sure that all students can know and use basic coding principles; all kids feel safe around robots; all students are comfortable solving problems they are ready for, or they know where to go to find the answers to the questions they have.

Wright wants students to move away from a guess and check method to thinking and planning ahead. And as they move into solving more complex problems, the more they are required to plan ahead.

"You are teaching them logic," said one audience member.

Students begin learning these skills in kindergarten. Eventually, they begin to see who is truly interested and who has the capability to do the work. As some students begin to focus on other things, those students will stay and tackle the more complex problems.

"We want to identify the kids who will create the new world, the programmers, the engineers," Wright said. "We want to find them early and encourage them to continue on."

Wright also wants to make sure that staff is comfortable doing this new thing.

"That has been the happiest thing for me, being here," Wright said.

At his last school district, out of 120 teachers, only 5-10 were really interested but he has watched every teacher at WSD embrace the new model.

"They all see how this fits into the transition. These guys get it," he said.

After going over the skills that the students are learning, and showing off some of the robots they've created, he did a demonstration using a drone and a robot for his audience.