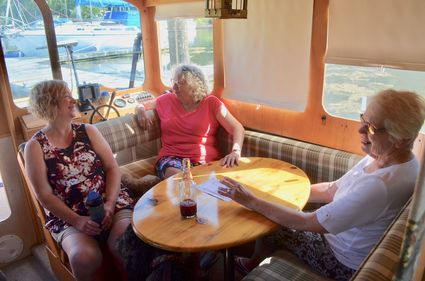 Rae, Maggie, and Bonnie Pimm have enjoyed a lot of time on Gary Pimm's houseboat. Six for drinks, four for dinner, two for sleeping, they said. It's lovely, but it can get crowded.

The Wooden Boat Show had something for everybody this year.

"The show was great," Allen Bennett, one of the organizers, said. "We had many more boat exhibitors this year than in the recent past. We filled both B and C docks with beautiful boats. We had good weather, although a bit warm, good public participation, and received many nice words about our show from both the public and exhibitors."

I know little about boats, but I got to meet some fascinating people, including a woman who is working on a cure for malaria, a jazz pianist, and a man in his 80s who has been building boats since he was 12.

Kathleen McLaughlin of Clatskanie and her boyfriend bought a Lake Union style dreamboat about three months ago, when they found it for a great price on Craigslist. The two went to the Port Townsend Wooden Boat Show for a first date, and had fallen in love with a boat they had seen at the Wooden Boat Show in Cathlamet last year.

She was happily looking at it again, only this time from her boat.

The one she had fallen in love with was a houseboat designed and built by Gary Pimm when he was in his 60s.

Pimm is 83 now, and he and his family were at the Elochoman Slough Marina for the boat show, which has become a regular stop.

Pimm built his first boat when he was 12, according to his son Brian Pimm. It was a folding canoe with wheels. He would hitch it to the back of his bike and take it to a nearby slough in Portland for a paddle.

Pimm was a construction electrician by trade, but he had to give it up when he developed Meniere's Syndrome. Vertigo made it impossible for him to climb ladders or work overhead, so he turned to boat building.

In 1965, he bought a boat. It wasn't much, and has been rebuilt three times. The family took it out on lakes and found beaches to camp on. That was fine for years, but as he got older it got harder.

The idea for a houseboat grew in his mind.

"He looked at tons and tons of different plans," his son, Brian Pimm said. "He went off what he'd seen and what he wanted and laid it out and built it.

Totally without formal training. Just a love of boats, and some really good woodworking skills.

While Gary and Gary, Jr., paddled the Elochoman Slough in a couple kayaks, that, yes, you guessed it, he made himself, the rest of his family was chatting at the table on the houseboat.

It's crowded, someone said.

The houseboat had been built in 2000, and while it was cosy, the woodwork was lovingly crafted, and it was comfortable and airy inside.

Six for drinks, four for dinner, and two for sleeping, everyone recited. Everyone being Bonnie, Brian, and Brian and Gary, Jr.'s wives Rae and Maggie.

Gary and Bonnie still take the houseboat out of the river and go camping, with a little help from their sons. It only does six miles an hour and the kayaks store on top.

Brian and Gary, Jr. built an electric outboard for his kayak. Gary can paddle for awhile, but he has arthritis and lost three fingers in a chipper.

"If he gets tired, he just fires up the motor and comes home," Brian said.

Nearby, I found Dan Pence talking to another enthusiast about the electric motor in his boat. It wasn't long before he had me laughing.

"I started boating when I was a little kid," he told me. "My grandfather was a fisherman and my father grew up fishing. He went to college and became a businessman to the dismay of my grandfather."

As a kid, he spent a lot of time with his family in his grandpa's old boat, touring the Channel Islands.

"When my wife and I had kids, I wanted a boat we could go out on and sleep," Pence said. "But I wanted a boat I could trailer so I wouldn't have to pay for all the mooring fees and the travel lift-all the high expense of owing a yacht--I wanted to avoid."

"I wanted it to be safe for toddlers. I didn't want to them to just fall out," Pence said. "The idea of this was just a big play pen that would float and safely go places with the tiny tots."

That was 25 years ago, he pointed out.

So he made some changes, creating a queen sized sleeping space in front and turning the bunks into a settee.

"We used to have to climb through the window," Pence said. "That worked in my 30s. I don't climb through bathroom windows on my vacation any more."

Five minutes later, his wife Sandy climbed in through that "bathroom window." They likened it to riding a men's bicycle that was just a little too big, Dan wincing a little.

Sandy is the CEO of a pharmaceutical company in Portland where they are working on a cure for malaria.

Talk turned to the motor and how the boat was built.

"I'm a reader. If I want to find out something I'll pick up a book," Pence said. "Someone handed me a book called Polluting for Pleasure. It was all about fossil fuel pollution and boats. I had all this history with two stroke engines and I was resolved not to do fossil fuel stuff if I could help it."

There were books coming out about using electric motors for kayaks, and Pence thought, maybe it could be done on a bigger scale.

"One of my wife's colleagues had a tree farm in Pennsylvania. He asked if I wanted to check out the electric motor in his forklift," Pence said.

When the Pence family moved back to the west coast, he crated the motor and had it transported with all their other household goods.

"Now I'm in Portland carrying this motor around looking for a boat to put it in," Pence said.

It's an interesting image, and I tell him so.

"It weighs about 90 pounds," Pence laughed

He found a hull that had been abandoned. He modified it, built it up, decked it over, put the cabin top on it, put the engine in, and did all the electronics, and added ballast.

"The hull was rated for 1.5 to 6 horsepower, which was perfect," Pence said. "The reason it's low powered is because it's a canoe shape. It doesn't have much stability so I had to keep everything low. It goes back to the 1920s when they were using sailboats with motors. They didn't understand the design of real power boats at that point."

Jonie and Mike Horsefall were pulling up to the dock in their 36 foot boat designed by Ed Monk, Jr, when I met them.

The pair had purchased this powered boat a couple years ago, after sailing for 25 years.

"We loved this boat right off the bat, but it was hard parting with the sailboat," Jonie said.

"I'm a pianist, a professional musician in Portland," Mike said. "Thelonius Monk is one of my favorite jazz piano composers, so we named it after one his compositions, which also has nautical connotations, Blue Monk, and also refers to the designer." 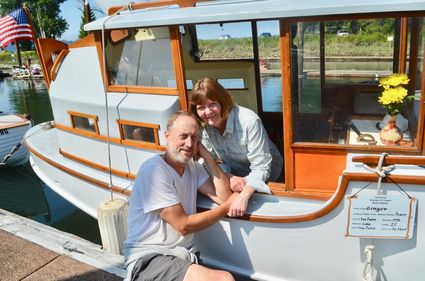 Dan and Sandy Pence of Portland, enjoying time on the Ginger.

Another boat that got some attention this year, was a raft built by local resident Ron Wright, according to Bennett.

"The raft was built entirely from materials Wright had salvaged from the Columbia River and along the shore. It drew quite a bit of attention and votes. Ron floated the raft from PI to the marina and back relying only on the tides and current. He did have a high end tech electrical outboard aboard in case it was needed," Bennett said. "There were at least four boats that relied entirely on electrical propulsion."