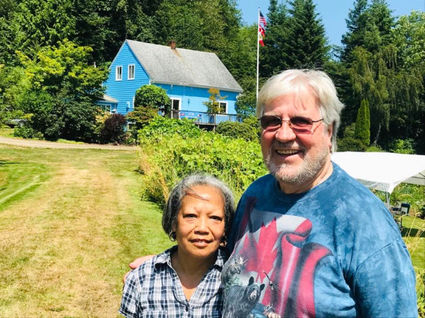 Paradise found in the Westend

Just a little west of the Rosburg Store hidden in plain sight lies eight and a half acres that was once just pasture land. There were no trees on the property. That was almost two decades ago, and the pasture has trees hiding the solace on Seal River for Poul and Zenaida Toftemark who reside there.

Zenaida is from the Philippines and has lived in the United States for 45 years. Poul was born on Fyn Island in Denmark and moved to Eugene, Ore., when he was 13. He joined the United States Army when he was 17 and was stationed in Germany. He met Zenaida at O'Carroll's Tavern in Naselle. He worked for Weyerhaeuser in Longview for 19 years and spent 13 years from deckhand to skipper on the fishing boat Hazel-Lorraine 1 before it was sold and renamed the Alaska Rose. That boat meant so much to him that he painted his house the same beautiful blue.

The years go by quickly, but Poul has had their camping and pig roast every year and Saturday was their 20th anniversary of this event that has always been open to the community. Zenaida and her smiling friends worked very hard in cooking traditional dishes from the Philippines. Poul had about an acre of the grass looking pristine for the entertainment and the camping area had close to 80 people comfortably settled in nice camp sites. Well over 100 people attended the three-day event of camping, jet skiing on the Seal River, volleyball, food, and music. It was three in the afternoon when "Public Nuisance," a local band from Astoria, played music while everyone enjoyed the pig roast. I was able to meet some very wonderful people while recognizing familiar faces from the area.

First of all, I would like to thank the readers of Downriver Dispatches for your input to me in getting pertinent historical information accurate; however, sometimes mistakes are made from the information available to me at the time. I put no fault on anyone; stuff happens. I recently found out that Dean Badger who recently passed away had more close family still living in the area. Dean's first cousin Larry, brother to Raymond, had children, three of whom still live in Wahkiakum County. Dean sold some of his Badger land to his first cousins once removed, who reside there today. It is wonderful news to know that this pioneer family legacy is continuing here in the county. 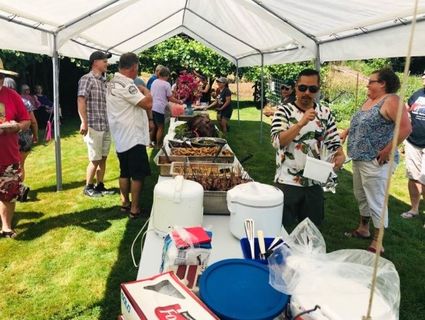 Don't forget that Valley Bible Church located at 4723 SR 4 W in Rosburg will host a blood drive on August 13, 1-6 p.m. This is sponsored by The American Red Cross. You can visit RedCrossBlood.com and enter valleybiblechurch or call Susan Burkhalter at (360) 465-2264 to schedule an appointment.

Coffee with a Cop

Put it on your calendar to come and join your neighbors, Sherriff, and Undersheriff at the Rosburg Store on August 14 at 8:30 in the morning to enjoy coffee, get some breakfast, and enjoy the conversation. You can ask questions and voice your concerns while getting to know your law enforcement officers from the community.