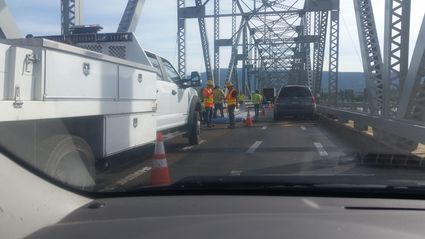 A construction crew began laying a membrane Tuesday evening on the new wooden decking of the Puget Island bridge in preparation for paving. Overnight closures, 9 p.m. to 5 a.m., were scheduled Tuesday, Wednesday and Thursday nights for the work. Wahkiakum County Engineer Paul Lacy said Tuesday that the contractor has said that if the paving proceeds quickly, the start of the Thursday closure may be delayed to accommodate people coming home from the opening night of the Wahkiakum County Fair. Watch The Eagle's Facebook page or website, www.waheagle.com for updates.

As usual, Wahkiakum County commissioners covered a variety of business when they met Tuesday.

Commissioners heard a request from Auditor Nicci Bergseng to add another deputy to her office.

At the request of Commissioner Mike Backman, the board agreed to hold a workshop discussion at the end of their August 20 meeting to go over the details of the request.

Bergseng told the board she wants to train the new deputy to handle a variety of tasks, including payroll, now handled by just one clerk without a backup.

With two employees possibly retiring in the next two years, it would be beneficial to have a trained deputy clerk ready to step into their shoes, she said. The department has a part-time position, but that hasn't been adequate to cover staffing needs, she added.

"I support the request," said commission Chair Dan Cothren. "I see the staff issue, handling the unfunded mandates [duties mandated on the office by the legislature without providing a means of paying for them]."

"This will be one of the best years we've ever had for renewal," Kaino said. "The majority of your employees will see a reduction in premiums of 2-9 percent."

The county group has nine medical plans for less than 100 employees, Kaino said. It offers two dental plans, which will see increases and a vision plan.

At least 40 percent of county employees participate in a wellness program, and that qualifies the group for a 4 percent rate reduction

The pool's board of directors is considering the possibility of adding a program to provide counseling for jurors participating in emotionally draining trials. Finding a funding mechanism is a key, Kaino said.

Commissioner Gene Strong, a member of the pool's board of directors, commented that the service would be worthwhile.

"In my tenure [as county sheriff], I saw where it would be good," he said.

Kaino said the proposal would be considered further by the pool's board of directors.

After much discussion, commissioners voted to fund development of a county comprehensive park and recreation plan.

The plan would qualify the county to apply for grants and other funding to develop recreational facilities, a goal that came out of bi-partisan public meetings earlier this year, that led to the formation of the Wahkiakum Resource Action Plan workgroup (WRAP). Bill Fashing, executive director of the Cowlitz/Wahkiakum Council of Governments, said his agency could provide the technical expertise needed to get the plan done by March 31, deadline for qualifying for the grant funding cycle.

"I mentioned $8,000 to $10,000 initially," Fashing said, pointing out that the lower number reflected work done on Castle Rock's existing plan and the higher number attributed to the need to create a new plan for Wahkiakum County. 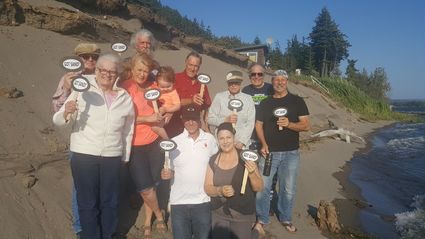 Residents of Cape Horn gathered last week to pose for a "Got Sand" photo to send to the US Army Corps of Engineers to press for speedy placement of sand along their eroding beach.

"I think the plan is important," commented Strong.

"Parks are costly," Cothren said. "It kind of puts a sour taste in my mouth."

Money spent on park development could be better spent on developing infrastructure, such as sewer system improvements, he added.

Fashing said he could get the plan done for $10,000, and said that if the county were going to go ahead, he would get the process going by conducting a survey at this week's county fair.

Commissioners voted to allocate $10,000 for plan development, with Auditor Bergseng tasked with finding a fund source in the county's budgets.