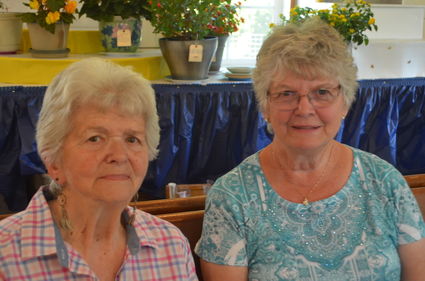 The 2019 Wahkiakum County Fair has been dedicated to longtime volunteers, Barbara Rose, left, and Sandy Hart.

The annual fair is a chance for residents, divided by KM, to come together and not only show off but also take pride in what makes us distinctly Wahkiakum. It's time to see what our neighbors have been working on, whether it's an art or craft, growing produce or flowers, raising stock, or making jam and pickling everything from the garden. It's an opportunity to get inspired to take up a new hobby or get better at the one you're already doing. It's a celebration and a congregation of friends old and new.

And none of it is possible without volunteers like Rose and Hart.

Both retired in the last couple years. Well, technically, one succeeded in retiring, the other one is still trying.

Sandy Hart was back to help out this year, and when she started talking about hanging quilts, Barbara Rose perked up a bit. The pull to participate was ingrained after all her years of volunteering.

Rose was born and raised in Rosburg. She participated in 4-H as a youth, entering her sewing projects in the fair. After she married, her five children were active in 4-H, and life was centered around the fair every August.

In 2007, she was asked to be a superintendent of the sewing, quilting, and needlework section of the T-building.

"She came to me and said, 'You will help me, right?'" Hart said. "We worked it together for many many years."

The two continued to work together, even when Hart became superintendent of the T-building.

Hart and her husband moved to Wahkiakum County in 1992.

"I had retired from banking and was looking for community involvement," Hart said. "I love my retirement."

But retiring her position as a fair volunteer has been a little harder.

"It kind of draws you," Rose admitted.

"I woke up one night and realized I needed to check and see how things were going at the fair," Hart said. "They were lacking superintendents and lacking help. I came and worked for a couple days. I am acting in the quilting department again."

"There's quite a bit of work before the fair," Rose said.

"I would say I was putting in at least 40 hours just getting ready for the fair," Hart said. "Then I would be here Monday through Saturday the week of the fair. I would open the building and close the building. If a hostess didn't show, I would stay. On Sunday morning, I would be here anywhere from three to six hours giving the exhibits out and taking down curtains and skirts so we could reuse them, and cleaning up."

It's a lot of work, but the payoff is such that the same people come back year after year.

"You get to see so many neat people you don't get to see the rest of the year," Hart said. "It's the camaraderie of working with different people, and meeting all the people coming and seeing their faces when they looked at the building and all the stuff."

The fair starts today and runs through Saturday.