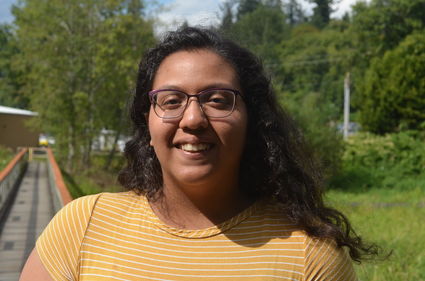 Ayesha Ahmed, who graduated from Wahkiakum High School in 2018 and now attends Lower Columbia College, was named to the Northwest Forensics Conference Division III All-Conference Team after her very first year as a student of debate.

Ahmed is loving life after high school, and it shows.

“I think it allows me to try different things when I’m ready to,” she said. “I can do a little bit of math, a little bit of humanities. I really felt like I got to be myself. It was really nice, because for a long time I didn’t really know who I was.”

The seed for this new found success in debate got planted when Ahmed got into a rather serious and lengthy conversation about a heavy duty issue with a substitute teacher at WHS. Actually, it probably started well before that, but she was lucky enough to run into someone who challenged her. And with a teacher who was more interested in the process than the outcome, Ahmed was allowed to come to her own conclusions and grow as a thinker.

“She was so cool,” Ahmed said. “Every time she was at school, I would talk to her.”

“I knew I loved having those conversations. I didn’t know if I liked giving speeches, but I knew that I liked being around really smart people and talking about really smart things,” Ahmed said.

That is what drew her to debate and to the debate team, delightfully named the Fighting Smelt.

Last summer, before her first year at LCC, she emailed the debate coach, Alex Brehm, to ask more about the program and let him know she was interested.

“That day we were doing impromptu,” Ahmed said. “I had to analyze a quotation and talk about why I thought it was right. I was so nervous.”

But better yet, she was elated when it was done.

“That felt great,” Ahmed said. “So I kept doing that. I liked leaning into that side of myself. I like talking about messy, lived experiences. What it is about to be a person.”

She remembered her first competition with a laugh.

“It was crazy. We have 30 minutes to prepare what we are going to say. Then we have back and forth speeches. We can ask for help and we can use our phones,” Ahmed said. “I’d never debated anyone, except for my teammates at the time.”

“We had two sets of debates going on, and I asked my coach for help, but he could only help in the first set, and I was always in the second set, so I had to prepare the case all by myself,” she continued. “I was so nervous. I wrote so many sources and I think I lost four debate matches and I won one of them.”

“You don’t really know what you are going to talk about,” she said about competition. “You’ll find out if you are negative or affirmative to a resolution, and you’ll know who your opponent is. You’ll find out which flight you are in. When it is time for flights to meet up, you meet your opponent, and that’s when you finally go through a list of resolutions until you agree on one. And then you argue that.”

The events are unpredictable and competitors have to learn to think on their feet.

“There are times I would have to spend half my time trying to figure out what something is,” Ahmed said. “That’s what most of the tournaments are like. I kind of like it that way. I would spend my whole weekend, scrambling to learn things in two days, learning more than I learned during a week of classes. It was hours of researching and hours of analyzing. It was just a super nerdy educational environment.”

Ahmed will spend another year at LCC, and with the debate team. She’s considering where to continue her studies and contemplating a future, possibly in politics.