Bridge work: It's a thrill! 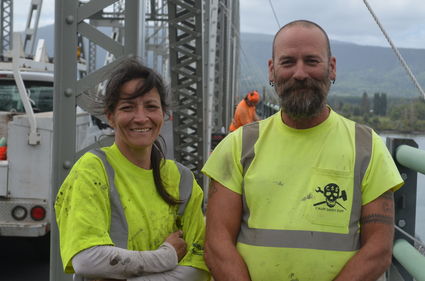 It takes a special kind of person to do bridge work, according to the contractor for the Puget Island bridge project, Jim Cailiff.

And even more rare, at least for now, are the women who do the work.

Lisa Cienega used to jump off the roof of her house and onto a trampoline when she was growing up in Florida.

These days, she works on bridges in the Pacific Northwest, from Seattle to Salem, as a member of a union, Pile Drivers 196.

The Puget Island bridge project was nearly done when I caught up with the two last week. They, along with three others, were putting in an extended railing to protect bicyclists and doing other finishing work.

The two met while working on a viaduct in Portland, and they’ve worked together off and on ever since.

Cienega got her start on that viaduct as a laborer.

“My boss at the time, well, he wasn’t my boss, he told me I was scabbing on his work and made me join his union,” Cienega said. “So I was in the Laborers Union for seven years.”

She loves the physical work, and prefers to be outside, regardless of the weather. Mostly.

“I love bridges,” Cienega said. “I love them. If I’m not outside, I’m inside. If I’m inside, I’m falling asleep and doing nothing. That’s what I do inside, nothing. I can’t do office work, I can’t sit down at a desk. I fall asleep at my own computer at home. I have to be outside. I don’t care if it’s raining or snowing or anything. Well, I do care to to an extent, but you know, I have to be outside.”

I looked down at the chain link that had been set up temporarily to provide a structure for the crew to work on as well collect debris, and the water below it. I felt a familiar twinge.

“It’s not scary,” Cienega said. “I jump down there. It’s like jumping off my roof onto a trampoline.”

“You bet,” she said. “I went skydiving once. I haven’t had a chance to do it again, but I will. I’d go bungee jumping and do other things like that, but why? Skydiving supersedes all that.”

There were a total of three women when Cienega joined the union 10 years ago. Cailiff estimates there are more than 20 now, but their union is bigger now, extending across five states in the west.

“I just fell into it,” Cienega said. “I just do it because I can’t really do a whole lot of anything else. It’s all I know. It’s not for everybody. There are a lot of women I really think that would make it and a lot of women I’ve tried to see make it, and I haven’t seen them quite make it all the way.”

“It takes a certain of type of person, regardless of gender,” Cailiff said. “It takes a different sort of person.”

When I asked him to describe that person, he pointed at Cienega.