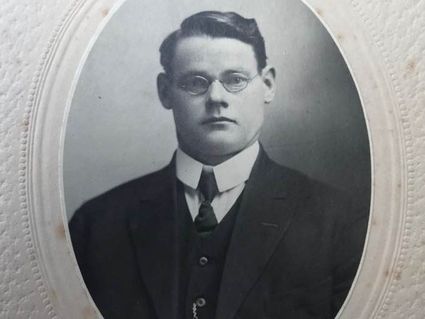 Through the Fog of Time Part II

The house where Hjalmar and Mabyn Klint raised their three children is still seen today in the valley where they had lived. The three Klint brothers must have known what an opportunity they had in acquiring the land. The area had a natural clearing, and they did not need to cut down as many trees in order to have decent land for farming or raising cattle. In many other places like Eden Valley, it would take decades to clear the tree stumps for a respectable farm. This natural clearing saved them an enormous amount of time. These were hearty people, in a word, tough. Mabyn's father had been a miner and prospector for close to 20 years in southern Oregon.

If one were to talk to any of the men who have lived here most of their lives as fishermen, loggers, or cattlemen and look at their hands, one could see that these men's hands are huge and weather worn. Years of hard working with their hands would do that to them. Hjalmar was no different. Mabyn had it just as hard. She would be up long before the children doing chores to prepare for the day. Cooking, cleaning, gardening, and when needed, she would milk cows and do anything else required to keep the family going. The three children would grow up with the same work ethic as they, too, would take their places in keeping the farm going.

The Klint farm was a Grade "B" dairy. Standard for a dairy farmer to be classified as a Grade "A" producer, the producer's facilities and milk must meet additional rigorous health and sanitation requirements than those of a manufactured grade commonly called Grade 'B' milk producer. Grade A milk can be used for fluid consumption, whereas Grade "B" can be used only in manufactured dairy products such as cheese, butter, and nonfat dry milk. It was the wisest decision they made by becoming 'B' dairy farmers. It was cheaper because they could drink their own milk without all the regulations required for 'A' farms, when in reality 50 percent of all the area farms' milk went into making butter, cheese, and non-fat dry milk.

Hjalmar's son George Edward Klint was born on November 20, 1934, in Portland. He grew up on the family farm at the bottom of KM Mountain in Grays River with his sisters Marie and Kathleen. Hjalmar would have to overcome many obstacles on his way to building a family--his youth, inexperience in a land he didn't know, and lack of understanding the language made it difficult. He learned quickly, but the years of hard work took their toll, and he died at age 68. George was just six years old, so he and his sisters had to help out their mother at a young age to make their small dairy farm survive. Mabyn hired men to help work the farm until her death in 1960.

George was able to attend the Rosburg School, but his determination to help his family caused him to lie about his age in order to be hired as a whistle punk in the woods when he was only 15. By age of 17 George was setting chokers for Durrah and McCormick of Skamokawa. He would go on to set chokers for Cap Schmand and drive a truck for W.W. McNally. In 1965 Duffy Larsen sold a Mack truck to George, and he started hauling logs for Stubby Magnuson, Roy Gorley and Joe Florek.

When Donna Irene Gatens was born Nov. 21, 1939, in Nemah, the daughter of James Francis "Frank" Gatens and Lucy "Nettie" Slater, the doctor had to come by boat out to Twin Point on the Willapa Bay to deliver the baby. Donna was raised with four brothers.

George met and married Donna Gatens on June 29, 1958. She had just graduated from Naselle High School in 1957. They met while working at her father's grocery store in Grays River. They lived on the farm they bought in Deep River and were parents of daughters Janine and Diane. Donna was the type who loved to be a stay-at-home wife and mother until her children got old enough for her to explore other things. So in 1979, she opened Donna's Flowers in Naselle and continued with the business until 1989 selling flowers, Iitala Finnish crystal and additional gifts. Following this venture she worked at the state park in Chinook, acted as a caregiver for Berenice Appelo and worked at the Appelo Archives Center where she took much pride in writing books on local history.

George was known for his sense of humor and his big heart. He was a jokester and the best story-teller who frequently amused family and friends with his stories of when he was a boy. At age 78, he passed away October 31, 2013, in Astoria and is buried at Peaceful Hill Cemetery in Naselle next to his wife of 54 years, Donna Irene Gatens Klint, who passed away from cancer at the age of 72.

The Klint home passed to George's older sister, Marie, who married James Fauver. She lived in the house until she passed away in 2018 at the age of 87. This home has been in the Klint family for over 100 years. Now this bright sky blue home is creating a new history with new people. We have read about Hjalmar and Mabyn and heard much about this wonderful family who left an incredible legacy and gave more to the community than most will ever know because we only see history through the fog of time.

First of all I would like to thank those who have helped me in the past and the present in guiding me in the right direction with my historical research for Downriver Dispatches in The Wahkiakum County Eagle. I would like to thank the following in no particular order: Kari Kandoll, Anita Raistakka, Kelly Shumar, Larry Hendrickson, Tiffany Coop, Kathi Howell, Geri Florek, and Rick Nelson. Neither time nor space permits me to thank others who have contributed to my writing. Thanks again for your support and inspiration.

Don't forget that the Grays River Grange #124 has their Farmers Market on Tuesdays, 2-4 p.m., until harvest is complete and the produce sold. Great produce at reasonable prices.

This is the last announcement that the Wahkiakum Lions Club is conducting their annual Frozen Berry Sale. They have Strawberries, Raspberries, Blueberries, and Marion Berries. These berries are quick frozen in 10 pound boxes. Strawberries are $26, Raspberries are $32, Marion berries are $25, and Blueberries are $27. There are order forms in Naselle at Johnson's One Stop, and Okies Market, and in Rosburg at Johnson Park, Rosburg Store and Rosburg Hall. For more information call 360-849-4003 or 360-795-3337. Order before Sept. 1. Delivery is on September 7 at 10 a.m. at the Rosburg Store.

For those who are 55 and older, The Naselle/Grays River Valley Seniors luncheon is held on Wednesdays at the Rosburg Hall, and the potluck will be at the Valley Bible Church on every fourth Wednesday. Anyone inspired to volunteer on Wednesdays or would like further information may contact the Naselle/Grays River Valley Seniors' President Diane Hollenbeck at dianemarye@gmail.com or phone her at 360 465-2991. Anyone interested in renting the Rosburg Hall is encouraged to contact Sonja Kruse at 360 465-2251 or Dee Nikkila at 360 465-2595. Thursday luncheon at noon at the Rosburg Hall is sponsored by the Community Action Program (CAP) out of Kelso/Longview. Any questions, contact Denise Rae at 360 425-3430 extension 259. 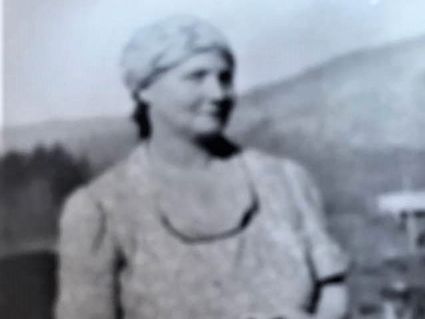 Those who are in need of food should go to the West End Food Pantry at Johnson Park every Thursday from 1-5 p.m. The food for you is free at no charge. Johnson Park is looking for board members to help coordinate the facility. Anyone interested in volunteering may contact Shonda Ware at 360 465-2722 or Toni Fest at 360 465-2393.

Monday is Labor Day. The Naselle Timberland Regional Library will be closed all day as will all other library branches.

Skamakowa Grange #425 is hosting an open mic for all musicians, singers, and entertainers starting at 6 p.m. on Friday. Sign up is 15 minutes before show time with a jam session following. This is a personal invite to all Westenders to come and hear me perform as well. Those who have met me through The Eagle are especially invited. I will be looking forward to seeing you there.