The Wahkiakum County PUD Board of Commissioners listened to reports on Tuesday, including one from a representative of Bonneville Power Administration, and after some conversation and a little bit of levity, decided to honor the general manager by renaming a substation in his honor.

A 1.5 percent surcharge is expected to kick in for all of BPA’s customers, Wilson said, in order for the agency to raise $300 million in reserves. He believes the surcharge will go away when the goal is accomplished.

There will be another 1.5 percent increase to power demand charges for the Wahkiakum PUD.

General Manager Dave Tramblie calculated that this 3 percent increase adds up to about $50,000.

“He’ll be retiring before too long,” Reid pointed out. “We can put a plaque on [the substation]...in a place where nobody will see it.”

After some discussion, the other commissioners agreed and the motion passed.

The newly named substation is currently undergoing some upgrades. The contractor, Power Technology, Inc., has been pouring concrete, installing “ground and mat,” installing culverts for drainage to the holding pond, as well as constructing a fence around the holding pond.

The PUD will hold a special meeting next Monday, 1 p.m.

The only topic listed on the agenda is a presentation from NoaNet respresentative Chris Walker about fiber plant design.

A PUD employee recently traveled to Missouri to inspect the new transformer, according to Tramblie, and they now await delivery.

He expects the project to be completed by the end of this month.

Tramblie also reported that he would be meeting with the general manager of Cowlitz PUD on Wednesday to discuss mutual aid issues and that Noanet will visit the PUD on September 9 to share their design for the broadband infrastructure.

A preliminary budget had been filed, Auditor Erin Wilson said.

Finally, Tramblie suggested that the PUD revisit finding another water source for the community, as had been discussed in the past.

He had been advised that it could cost as much as $100,00 to locate a new source, but he suggested that the PUD might take advantage of drought mitigation grants available through the State of Washington.

“I would like to keep that on our radar as a potential,” Tramblie said. “It would be nice to have a plan moving forward, perhaps some communications within the community with other entities might be beneficial.” 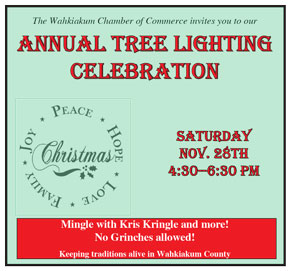