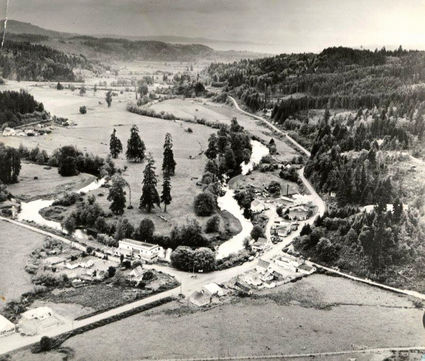 Grays River Then and Now

My life forever changed when I was drafted into the United States army in 1969 right out of high school. Throughout my experiences in the military, I found myself for the most part not thinking about the past or the future. I was just living in the moment like most GIs at the time, not knowing my destiny. The years went by so fast, as if my life was a blur, that when it was my time to return home, I still visualized everything in my hometown to be the same and everyone to be the same. I was not there to watch things change gradually, but the shock of seeing so much change was mind boggling, especially the people. Young boys and girls are now men and women. Some of the changes were easier to accept than others, but one acquiesces with inevitable change and adjusts accordingly.

In 1792 when American fur trader Robert Gray (1755-1806) became the first non-Indian to enter the Columbia River, he had no idea of the impact he would have on local history because of his name. Grays River and Bay were named for him. Over many decades, Grays River has changed dramatically and only those who have been here and experienced this change can really understand the historical significance of this change. For those who also moved away for a period of time and returned will also understand what I mean.

The changes in Grays River are too numerous to list, but some are worth noting. One example is the Meserve Store that is now the Meserve Park built by volunteers from Grays River Grange #124. The store was located just south of SR4 on Hull Creek Road on the north bank of the river. Many people came by boat as well as by the road. This two story general mercantile store was built by William and Alta Meserve in the late 1890s. It not only had food and merchandise available for the local farmers, but also housed a one chair barber shop and a bowling alley with only two lanes. There was also a theater and post office in the building.

If it were not for William Meserve, Grays River may have become a ghost town and just a footnote in history. When the State of Washington was deciding on where to put the highway, one proposal was to go from Deep River along the Columbia River to Altoona completely bypassing Grays River. This would have devastated the community drastically. Meserve, as a state legislator, blocked the proposal in favor of the present day route.

This was a prosperous community for decades. South of the store was the Peterson Hotel. The Ferndale Creamery was near the store. Across the highway from present day Duffy's and in front of the present day fire station was Appelo's Shopping Center complete with a Standard gas station with the Methodist church next door. Only the gas station's concrete island remains with a burn ban sign there. On the same side of the highway was a Union 76 gas station that is nothing more than a concrete slab today.

Everything in Grays River has changed. Most of the old buildings are gone and the old businesses are gone. The old Samuel Walker house now owned by Casper John Schmand is still standing across from Duffy's, without paint and decaying daily. This should be labeled a historical landmark because it is in excess of a century old. Samuel and his wife Julia founded Grays River in 1868, coming from Washington County, Oregon. The Grange is still operating after a century. The Grays River Tavern is now an Irish pub, and there is a cannabis store across the street.

Change is inevitable, but I have confidence in the pioneering spirit that is still prevalent in the county. The area was run down for years until Duffy's opened and more people moved into the area into houses that were once vacant. Those who remain will hopefully endeavor to keep the community prosperous through new business as well as the outstanding volunteers who help keep this community together.

The Naselle/Grays River Valley Seniors luncheon always has great home cooked food prepared by volunteers. It is held on Wednesdays for those who are 55 and older; also the potluck will be at the Valley Bible Church on every fourth Wednesday. Anyone inspired to volunteer on Wednesdays or would like further information, please contact the Naselle/Grays River Valley Seniors' president Diane Hollenbeck at dianemarye@gmail.com or phone her at 1(360) 465-2991. Anyone interested in renting the Rosburg Hall is encouraged to contact Sonja Kruse at 465-2251 or Dee Nikkila at 465-2595. Thursday luncheon at noon at the Rosburg Hall is sponsored by the Community Action Program (CAP) out of Kelso/Longview. Any questions, contact Denise Rae at (360) 425-3430 extension 259.

It may seem redundant, but those who do not know and are in need of food, the place one should go is to the West End Food Pantry at Johnson Park every Thursday from 1-5 p.m. The food for you is free at no charge. Johnson Park is looking for board members to help coordinate the facility. If anyone is interested in volunteering please contact Shonda Ware at 360-465-2722 or Toni Fest at360-465-2393.

Coming September 21 at the Naselle Community Center, a concert will feature Kim Angelis returning on violin, Jennifer Goodenberger on piano and Phil Keim, a vocalist from Astoria. The concert is hosted by the Finn-American Folk Festival and will start at 6 p.m. at the Community Center.

They also have a very big concert scheduled for October 26 at the Valley Bible Church in Rosburg. This one will feature Ruusamari Teppo, the great-great-granddaughter of Sibelius, the famous Finnish composer. She is coming over from Finland for this with the help of a grant from the Finlandia Foundation and a donation from one of our Finnish community members. She will play piano and sing. That one will also start at 6 p.m. Both concerts will feature food afterwards.

Those of you who are new to the area or those who are locals should visit this wonderful place that gives us a glimpse back in time to an era almost forgotten. Ask Anita Raistakka about their book lending for members.

The old Walker house was in front of the Union 76 gas station. All that is left of Appelo's and the 76 station are concrete slabs. Photo courtesy of Appelo Archives Museum.

Benefits of an annual membership include: 10% discount on bookstore and photo purchases (various rules apply), free use of the extensive library at the center, invitations to member's only events like the annual Champagne Harvest Party & Silent Auction Fundraiser. They will have an autumn fundraiser with food, wine, live music, an auction and more. Members are the first to receive their invitations. You become a part of preserving our local history for future generations to utilize and enjoy. Memberships are $10 for a student, $15 for seniors, $20 for an individual, $30 for a family, $100 for a supporting business, and those in the military are free. You can go online to apply at https://www.appeloarchives.org/membership and send your membership application and appropriate fees to: Appelo Archives Center, C/O Membership, 1056 State Route 4, Naselle, WA 98638.