Apple season is upon us 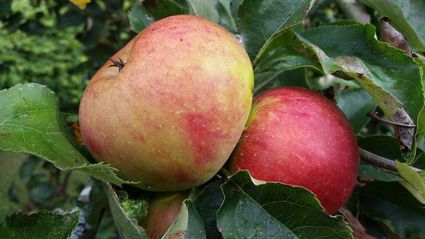 People have been raising and eating apples for thousands of years. Starting as a small bitter fruit in the Caucasus Mountains, they traveled the Silk Road to Greece, then Rome and with the Romans to all of Europe and the British Islands. The first apples got to the US on the Mayflower, the early colonists needing them not for their great flavor but because cider was an important part of their diet and economy. The lightly fermented beverage was safer to drink than water. Sometimes goods and services were paid for with cider.

The strange thing about apple trees is that the seeds do not necessarily grow true to the parent apple tree, each seed may resemble one or the other or neither of its parents. Plant a bunch of seeds, and in a couple of years, see if any are worth keeping. Traditionally this made table apple development a long process. But because most people were growing for cider, it wasn’t a big problem until Prohibition came along ,and many apple growers had to close down or find another use for the fruit.

Today named grocery store apples are clones of its parent.

Delicious apples came along at just the right time. In 1870 Jesse Hiatt in Peru, Iowa grew a red apple. He took it to an apple fair in Louisiana in 1893. Clark Stark tasted the apple and declared it “delicious.” He later bought the rights to graft and sell the trees. Red Delicious apples became the standard of hand eating and of lunch boxes in the USA.

Golden apples were developed by Anderson Mallus in West Virginia in 1916. Clark Stark bought the rights to the apple to partner with Red Delicious, though they are not closely related.

As a child Mary Ann Smith was transported to New South Wales, Australia, with her convict parents. As an adult, she was a respected midwife and was known as “Granny Smith.” In 1868, she discovered a sprout growing in a refuse pile which produced tart green apples.

Thomas Jefferson was big on horticulture. People gave him plants from all around the world. In 1779 the French minister to the USA, Edmund Charles Genet, gave him some cuttings which Jefferson donated to a Virginia Nursery where the Red Genet was produced.

The apple industry was set in motion by Henderson Luelling, a fortune hunter who traveled west during the gold rush. His wagon was so full of fruit trees and soil, that he, his wife and nine children were left behind by his wagon train. He met a William Meek in Washington State, and together they planted orchards primarily in the Willamette Valley. Apples were in demand by the gold prospectors. By the time local demand declined, railroads had been built to carry apples across the nation.

In 1930, the Japanese crossed the Red Genet with Red Delicious, resulting in the Fuji apple, introduced in the USA in 1980 and grown extensively in Yakima and Wenatchee.

Gala apples were developed by JH Kidd in New Zealand in 1930. Braeburn was developed in Moran, New Zealand, in 1952, and was introduced to USA in the 1980’s.

Honey crisp was developed by the University of Minnesota in 1990.

Pink Lady was developed by West Australian Agriculture department as a cross of Golden Delicious and Lady William in 1973 and has been trademarked.

Maybe an apple a day can keep the doctor away. They are low in calories, fat, cholesterol and sodium. They are rich in fiber, anti-oxidants and minerals such as potassium, folate, niacin and vitamins A,B,C, E, and K.

Only China surpasses the USA in apple production.