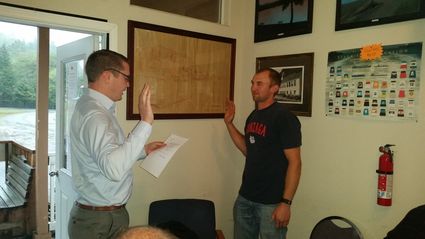 Attorney Tim Hanigan, left, administers the oath of office to Austin Burkhalter, swearing him in as a member of the Port District 2 board of commissioners.

Rosburg resident Austin Burkhalter has been appointed to fill a vacant position on the Port District 2 board of directors.

He replaces Lori Scott who resigned at the commission's August meeting. She hadn't sought re-election two years ago and, as state law allows, served until August.

Port Attorney Tim Hanigan said the position will be on the 2023 election ballot.

In other business at the port commission's Tuesday meeting:

There will be no vendors, Smith said, but kite flyers will start pulling and start filling the air with their huge kites around 11 a.m.

The park is full this weekend and for future weekends, and Commissioner Lee Tischer suggested most of the campers would be hunters, who are often banned from camping on private timberlands.

--Commissioners approved a recommendation from Smith to declare Vista Park's espresso stand surplus to port needs and proceed to sell it. The stand will be in operation on weekends through the end of the month.

--Smith invited commissioners to identify projects they'd like to include in an update of the port's comprehensive plan.

Smith said the plan needs to be updated in order for the port to qualify for 2020 grant funding programs.

An updated draft will be presented at a future meeting; the update needs to be completed by March, 2020, Smith said.

Operations should cost $381,000, non-operating expenditures should be $28,000. The budget lists $370,000 for capital projects; Smith said those will be determined by the comprehensive plan update.

The year should end with a balance of $264,614, according to the preliminary budget.

The commission will act on an updated copy of the budget at its October 21 meeting.